After reading the nightmarish statements by British Prime Minister Brown regarding his globalist ideology, I got inspired to write a post. I’m always told I write good essays, but perhaps a bit too long, so here’s a quick one of less than one thousand words, which is my definition of a haiku.

The European Union is an empire. 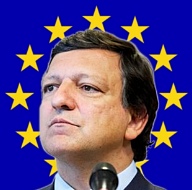 No, really. José Manuel Barroso, the leader of the European Commission, the unelected and unaccountable government for half a billion people, which is just now negotiating the surrender of an entire continent to the Islamic world, has stated in public that the EU is an empire.

Before you start laughing, think about it for a minute. Maybe we think it’s ridiculous to see the EU as an empire, but Barroso’s statement clearly shows that many people in leading positions do think like this. It would make sense to remember that all empires in human history have been created through war. The Romans didn’t create the largest empire in the world by being fluffy little bunnies, and neither did Genghis Khan.

If the EU is an empire, that means a war is being waged against somebody. And it is: A cultural and demographic war waged by mass immigration against the indigenous people of an entire continent — Europe. Whereas empires are normally created by waging a war against other peoples, the EU is the first empire in history created by allowing other peoples to wage a war against your own.

A couple of older posts on the issue:
– – – – – – – – –
European Commission president José Manuel Barroso expressed unease with the prospect of a second Dutch constitution referendum talking to Dutch papers ahead of a visit to The Hague later this week. “Referendums make the process of approval of European treaties much more complicated and less predictable,” he said, asking “every member state” considering a referendum to “think twice,” according to Het Financieele Dagblad. Mr Barroso in his previous job as Portuguese prime minister in 2004 backed a referendum on the EU constitution in his own country — but since then his thinking has changed, he indicated. “I was in favour of a referendum as a prime minister, but it does make our lives with 27 member states in the EU more difficult. If a referendum had been held on the creation of the European Community or the introduction of the euro, do you think these would have passed?” the commission chief asked according to De Volkskrant.

Anthony Coughlan, a senior lecturer at Trinity College in Dublin, Ireland, notes that in every EU member state at present the majority of laws come from Brussels. Why do national politicians and representatives accept this situation? He suggests a plausible explanation:

“At national level when a minister wants to get something done, he or she must have the backing of the prime minister, must have the agreement of the minister for finance if it means spending money, and above all must have majority support in the national parliament, and implicitly amongst voters in the country. Shift the policy area in question to the supranational level of Brussels however, where laws are made primarily by the 27-member Council of Ministers, and the minister in question becomes a member of an oligarchy, a committee of lawmakers, the most powerful in history, making laws for 500 million Europeans, and irremovable as a group regardless of what it does. “National parliaments and citizens lose power with every EU treaty, for they no longer have the final say in the policy areas concerned. Individual ministers on the other hand obtain an intoxicating increase in personal power, as they are transformed from members of the executive arm of government at national level, subordinate to a national legislature, into EU-wide legislators at the supranational.”

EU ministers see themselves as political architects of a superpower in the making. By participating in the EU, they can also free themselves from scrutiny of their actions by elected national parliaments. According to Coughlan, “the great bulk of European laws are never debated at council of minister level, but are formally rubber-stamped if agreement has been reached further down amongst the civil servants on the 300 council sub-committees or the 3,000 or so committees that are attached to the commission.” EU integration represents “a gradual coup by government executives against legislatures, and by politicians against the citizens who elect them.” This process is now sucking the reality of power from “traditional government institutions, while leaving these still formally intact. They still keep their old names — parliament, government, supreme court — so that their citizens do not get too alarmed, but their classical functions have been transformed.”

My interpretation: The European Union — or the Eurabian Empire if you will — is a naked power grab by the elites in order to dismantle the nations there are supposed to serve. Instead of being mere servants of the people in smaller countries, they aspire to become members of an unaccountable elite ruling a vast empire as they see fit. This is why they continue to promote mass immigration as if nothing has happened even if people get blown up, raped, mugged and murdered in their own cities. They simply don’t care. They are cynical generals on a warpath. Ordinary citizens are simply cannon fodder, pawns to be sacrificed in the conquest of their glorious, new empire. Mass immigration is used to crush all nation states simultaneously so that the natives have no real alternatives to flee to, and no countries can come to the aid of others against the advancing Islamization.

30 thoughts on “The Birth of the Eurabian Empire”