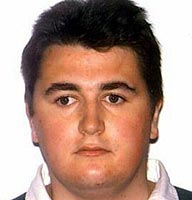 The latest news on Nicky Reilly, the alleged Exeter nail-bomber, describes him as an autistic young man who was brainwashed into Islamic radicalism.

If you read the details in today’s Telegraph, you’ll notice that he’s more accurately described as having Asperger’s Syndrome, which is slightly different from autism.

[Update: A correction, via Zonka in the comments:

“Asperger’s Syndrome is a form of high-functioning autism, not ‘slightly different from autism’. Autism is a general diagnosis and people with autism are generally as different from each other as normal people are, and the term autism is as meaningful as ‘dental problems’, which also covers a lot of more precise diagnoses.

“Sorry to nitpick here, but having autistic kids, I am tired of the general ignorance of the autism issue.”]

You’ll also notice that Mr. Reilly himself claimed to be “brainwashed”, even as he continued under the sway of his radical indoctrinators. Somehow he retained enough sense to recognize what had happened to him and describe it to his neighbors.

According to the article:

The man detained over a suspected suicide bomb attack in Exeter was an autistic 22-year-old allegedly radicalised by a gang of suspected Muslim radicals who were being monitored by police and MI5, The Daily Telegraph can disclose.

Investigating officers said that Nicky Reilly received a text message of “encouragement” hours before the nailbomb attack in a family restaurant.

Police have made the first arrests as the net closed in on the suspected radicals alleged to have groomed the bomber.

Sources close to the investigation said that the alleged corruption of a vulnerable young man — who suffered from Asperger’s Syndrome, had a history of self harm and had attempted suicide several times — was a “new horrific low” for Muslim extremism in Britain.

This may be a “new horrific low” for Muslims in the UK — I’ll let our British readers make the case for or against this assertion — but it’s certainly not a new low for Islam in general. The use of children and the mentally retarded, of the weak, the vulnerable, and the helpless, is now standard operating procedure throughout the bloody margins of the Ummah. A brain-damaged youth is simply a human remote-control explosive device for the psychopaths who direct his actions.
– – – – – – – – –

Detectives believe Mr Reilly planned to commit suicide and allegedly had help in constructing three “rudimentary but viable” bombs that had never been seen in Britain before. They were constructed from sodium hydroxide, aluminium foil strips and an essential oil, combined with kerosene.

It was confirmed that there were three devices in a bag packed with nails. One was partially detonated in the toilets of a restaurant in the Princesshay centre. The other two failed to go off.

“It could be set off by shaking the mixture but we are still not sure if the device was being primed or it was actually planned to be set it off in the toilets, in the belief it would blow out the whole restaurant” the source added.

“If it had gone up it would certainly have caused a huge fireball and the idea that this was happening in a family restaurant packed with children is awful.”

So this is what almost happened in Exeter. How aware were the authorities of what was going on?

Special Branch officers were monitoring a group of alleged radicals in Plymouth, where Mr Reilly lives with his mother. Early investigations suggest comparisons with an al-Qaeda “inspired” attack but not one necessarily directed by a senior figure.

The source said: “We were aware of this group and of Mr Reilly himself but he was right on the fringes of a group that did not appear to be planning any attacks.

Now we know that Special Branch were watching the Plymouth Group, yet they had no inkling of what was being planned. If Mr. Reilly had been luckier or more competent… What then?

“At the moment we are looking at 200 separate groups and this was just one of those. We were observing them at a local level but had no detailed surveillance.”

Two hundred separate groups! How many of them are busy training their own versions of Nicky Reilly? And how may of those human auto-destruct devices will be smarter and more skilled than the would-be nail-bomber of Exeter?

A friend of Mr Reilly said he suffered from Asperger’s — a form of autism — and tried to commit suicide after problems with his girlfriend in his late teens. He was sectioned, and after being released from a mental hospital he was allegedly groomed by a group of radicals.

Locals said Mr Reilly changed his name to Mohammed Rasheed last year and claimed he was “brainwashed” by men, who he would meet at a local internet cafe, kebab shop and outside a fish and chip shop.

This is the strangest part of the story: Mr. Reilly knew he had been brainwashed. Was he unable to stop himself from continuing in his deadly mission? Had he become an automaton, without the agency or volition to change the course of his own behavior?

And what about the “locals” who knew about the brainwashing? What did they think was going on?

Plymouth has a 3,500 strong Muslim community but [Omar Siddiqui, president of the Islamic Society at the university] said he could not believe the possibility that Mr Reilly had been radicalised in the city.

Mr Siddiqui said: “The Islamic community in Plymouth is very peaceful and we have never had any problems her at the mosque or the university.”

He said of Mr Reilly: “He always struck me as being not quite well in the head but he seemed a nice guy. He was always polite and greeted me nicely. He did seem to be extremely religious after his conversion.”

So here’s the story: a nice guy, not quite well in the head, falls in with a new set of companions who introduce him to the joys of Islam. Somehow, despite his mental disability, he learns how to build explosive devices and then tries to blow himself up in a toilet stall.

And yet the local Islamic community is “very peaceful”.

Who are you going to believe, Omar Siddiqui or your lying eyes?

27 thoughts on “More on the Exeter Nail-Bomber”