Below is the latest guest essay from our Russian correspondent Peter1.

Freud and the Genie
by Peter1

The soul of Arabs, the nomadic people living in desert, is best described by their fairy tales. 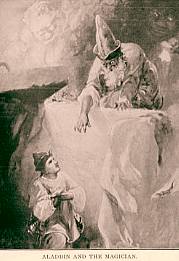 One of the most famous tales is that of a Genie, who managed to get out from the closed bottle and started travelling around the world, bringing destruction and fear. Another similar tale is about the Genie who lives in a lamp, and who fulfills all your wishes if you rub the lamp.

Let’s look at the same tale from another, Freudian point of view. Freud himself noted that rubbing the lamp is actually rubbing some parts of your body, and then getting all you want in your imagination. Now, consider the closed bottle, with a magic stamp on it which nobody dares break. This magic stamp is the taboo of virginity; breaking it will free the dangerous spirit, which can make you overreach, or kill.
– – – – – – – – –
The Genie from the bottle is known to be able to do only two tasks: build palaces or ruin the cities. Building a palace clearly means making the family home — the desired outcome of the marriage.

But another outcome is also possible. Freud himself, in his work “The Taboo of Virginity”, claimed that the man who breaks the taboo attracts the subconscious aggression and hatred of the woman, in addition to her devotion. That woman may become aggressive, and that is what ruining the city means.

Suppose that the spirit of the Arab-conquerors gets its inspiration from that tale. That is, it originates from breaking of their isolated tribal life in the desert by information from outer world.

And with their innocent tribal life broken, they react with an anger similar to that found by Freud.

4 thoughts on “Freud and the Genie”