Gates of Vienna commenter Ioshkafutz has taken up the postion of volunteer poster with the following treatise. He says:

As it is pertinent to the discussion in “Cassandras,” the original essay apeared as a comment on Little Green Footballs, where it was deleted while I was silenced for eternity for my sin of saying out loud what others think.

And may a flock of pigeons poop in both my eyes if I have changed anything but some spelling and punctuation. [Though your editors may have made changes for the sake of our readers. Send the pigeons our way – Editors ]

Charles Johnson said: “What is to be done is to continue educating people and exposing the agenda of the jihadists.” 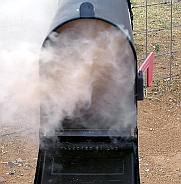 I, in my identity as “Mammamia”, responded:

Please allow me to dissent. And please bear with my long post.

You say: “What is to be done is to continue educating people and exposing the agenda of the jihadists.”

Well, creating awareness is certainly a form of “doing,” but obviously, it is not enough. In fact, seen from another perspective it is doing nothing at all.

For example, I can denounce malaria, describe everything science knows about malaria and wax extremely eloquent about the harms of malaria, but unless I or those influenced by me actually go out and spray DDT (or whatever they do these days), I’ve done nothing, or rather, despite all my good intentions and hard effort, I have failed to get anything done.

No, I am not suggesting that Muslims are vermin that need to be sprayed with poison. They are men, women and children with first names and last names and personalities. Islam is an old and majestic belief system, strong and complete enough to survive 1400 years, through the likes of Mongol invasions, colonialism(s), modernism(s), etc.

When I read the term “Islamo-Fascism,” I chuckle. We WISH it were Fascism, which only lasted twenty years! Today in my Italy, (the country that invented Fascism), there are very few real, honest-to-badness Fascists. In “liberated” Iraq instead, a girl was just religiously murdered by her father for falling in love with an Englishman. If one is to believe reports, this has also happened (and gone unpunished) thousands of times in the UK itself!

So despite defeat and exposure to freedom and superior Judeo-Christian and/or Secular values, Islam is as strong as ever and posits itself as an alternative system, with its own charter of Human Rights, its own complete set of values, which though perhaps abhorrent to some, has certainly proven its ability to successfully weather the ages.

Many of us laugh at these Bedouins, calling them “rag-o-heads” and “camel-riders,” but the way things stand, one way or another (through their merit and our demerit and perhaps through the way petroleum collected under the earth’s surface); the green oriflamme flag seems destined to fly triumphantly over huge swathes of Europe. And who knows? Even the next American President might have three Islamic names and the full support of Farrakhan!

Oh, right: I was expounding on the difference between denouncing and “doing.”
– – – – – – – – –
There are certain things to be considered, certain questions to be asked.

Do Muslims have a conscience? Well yes, of course they do. They are men, women and children. Anybody (perhaps not openly Jewish or Danish) who has traveled to the Middle East or Pakistan can vouch for the incredible graciousness of the people. They, the Muslims, have an Islamic form of conscience, resulting from an ethos derived from their religion. They don’t seem to get upset so easily about their own wrongdoings, whereas they are easily offended to paroxysms of rage by perceived slights from others.

For us this is the very definition of lack of conscience, for them it is simply being a good Muslim. It’s the old story of tribalism trumping ideals. “The worst of ours is still better than the best of yours… and that is why one of our terrorists can walk around our sacred rock, whereas one of your saints who has spent the best of his boogie years spoon-feeding the starvelings of the Sahel cannot.”

I certainly don’t like the word genocide, nor am I a Fascist, but I think back on the Aztecs and underneath it all, honestly, I’m glad that their culture of human sacrifice was obliterated from the face of the earth by those Christian invaders. Is one permitted to say that? Admittedly, the Spaniards (and others) didn’t go about it too nicely. They were Fascists, Nazis, Pinochetists, and worse. They were Ponce de Leonistas.

But wait! Did I say “culture of human sacrifice?”

You know something, Mr. Charles? The Muslim culture of human sacrifice is even worse than was the no-longer-extant Aztec one. The old Aztecs would at least hold grand ceremonies at appointed times and places and pluck the throbbing heart out of designated victims (captured enemies). Today, forty percent of British Muslims openly admit (though if silence is consent – and I think it is – then it is closer to ninety-nine percent of Muslims) prefer random, helter-skelter slaughters. These are “kaboom” splatter orgies (any time, any place and whoever is there is there). with, of course, that quintessential Islamic touch of the perpetrator’s suicidal participation. This act of sneaky self-sacrifice is to be rewarded by instant matrimony with 72 fawn-eyed virgins possessed of self-repairing hymens. Being a Frank Zappa fan myself from way back – I bet even before you – we can say that the suicidal heroics of Islam appear to be intimately entwined with plooking privileges.

Wow! Imagine having so many of these worse-than-Aztec people in your country!

Millions of them, as in the Netherlands and the UK and Belgium and Sweden and France!

Millions of people who consider your country “Dar ul Harb” – “Land of war”, and whose men of God defend terrorism in a day and age when the goods to kill an entire city the size of Paris can handily fit inside a briefcase and the technology to do such a dastardly deed is available on the Internet.

Now into this comes characters such as me, and – no doubt – the dreaded El Inglés. Big Isaac Asimov fans, wanna bet? Ever read the Foundation Trilogy, Harry Selden and the psycho-historians? We think we’re geniuses, but all we’re really saying is the ultra-obvious “something’s gonna break… and it’s gonna get very ugly.”

What does it take to imagine a dirty bomb going off in Birmingham or a water supply poisoned in Padova or a mega-train accident arranged in Barcelona? What does it take to imagine twenty Jumbo jets with thousands of passengers simultaneously dropping into the ocean? Why is it so easy to imagine a huge bomb killing tens of thousands of people somewhere in Israel with alternate / parallel images of ululating women, Kalashnikovs joyously firing into the air and candies handed to children?

CANDIES TO CHILDREN – to celebrate SLAUGHTER!

You, Signor Charles, accuse us of toying with Genocide. But give it a bit more thought.

You might call Bossi a Fascist or a Nazi, dear Mr. Charles, because he’s like that Belgian guy you’re not fond of (the one who supposedly thinks that Belgians are the superior race). Check out who Fiamma Nierenstein is. What is she doing in a government with Massimo Fini ex Movimento Sociale – that is to say, Fascist?!

Who are you jiving with your political debris, Signor Charles?

Anyhow, what’s gonna happen when the Lincoln Tunnel explodes, or Seattle suddenly finds herself poisoned to death? Why not? The spiritual leader of the man who might just rule the USA howls “God Damn America!” Isn’t the Reverend Wright – and by extension – Obama toying with Genocide?

Let’s say America is hit in a big way again by the Muslims. Everybody in Topeka, Kansas writhes and moans to death because of a light dust that a passing glider drops. It’s traced to the Muslims, an organization called, say, Habibi el Mahmoud Shabaam. As happened after 9/11, candies are handed out, there’s dancing in the street and there are lame apologies and freaky excuses. What’s the right reaction? Should only Habibi el Mahmoud Shabaam be punished or is all of Islam to blame? If all of Islam, how is this so? Wouldn’t it be more or less what El Inglés would do if he were dictator (in the last part of his infamous essay)?

Out of this you might imagine me to be a genocidal fascist-hugging freak. But instead, I’m an ex-hippy, Jew-loving, Catholic and full of Kumbayah. I even like multi-culturalism… that is, I liked it until the Muslims came along. What’s wrong with Chinatown and Little Havana?

Yes, dear members of GoV, and should any of you be here, dear Pajama People (supposedly the defenders of free speech and grassroots’ opinionating), this comment at LGF was deleted and my person banned from the premises by Charles, who reasoned:

This one will not be back.”

[Ah, but who knows if that will be the case? There is many a crooked lane to the crooked house, where lives the crooked mouse lizard.

And so-called fascist sympathizers are legion. They are just not necessarily fascists. — Ed.]