Since Afonso Henriques brought Fjordman’s name into the discussion, and because Pundita mentioned him in her response, I asked Fjordman to add his two cents’ worth. I’ll give him the last word.

Checked out Pundita’s writing about Tibet and China, and found:

…if you know about the holocaust that China inflicted on Tibet…

Holocaust??? How is this blogger not just another leftist hysteric? Beats me!

To which Pundita responded at length:

To Conservative Swede: What do you consider “conservative” about yourself, if you would call me a leftist for pointing out on my blog that China’s system of government is a communist dictatorship? Or did you only read a couple sentences of what I have written about China on my blog?

This is not just in the last century. This is happening today and has been happening all along, as the world’s democracies have looked the other way while yammering to their citizens about China’s “economic miracle.”

If you say that land clearing must happen for development, let me explain how an “economic miracle” and development happen in a communist police state:

How would you like it, if you heard a policeman on your street announcing through a megaphone that everyone living in your neighborhood had one hour to pack their belongings and leave? 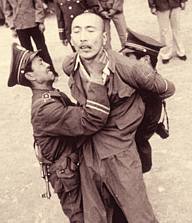 How would you like it, if you then spent the rest of your short life in near-starvation circumstances in a Chinese gulag, working 18 hours a day on an assembly line that cranks out cheap goods for export?

Or have you never heard of the infamous Laogai?

How would you like it, if you worked in the Laogai for no compensation because you are a prisoner for the rest of your life? Your crime? You are an enemy of the state because you protested being evicted from land you’d leased.

The situation is so awful that for years now, there have been pitched battles between millions of desperate Chinese and government goons, all over China’s Mainland. This March even the Panda-hugging TIME magazine finally made a small mention of the situation in their article China’s Fighting Farmers. Yet the TIME article is only the tip of the iceberg.

In the meantime, I recommend that you pay attention to the words of Graham Dawson in this comment section. He is telling you the truth about China. My only regret is that because this is a comment section, Dawson’s history lesson is all too brief.

With regard to the Muslim situation in China, it’s just the opposite of your claim in the “earlier comment” you link to in this section. You wrote, “Tibet is under the protective wings of a fully sound empire (China). Tibet is surrounded by Muslims. Pakistanis, Kashmir, Bangladeshis, Turks, Afghan, etc. Take away the protective wings of China and the Muslims will pour in.”

You are laboring under a misconception. China’s empire is not “fully sound.” The abuses inflicted by China’s rulers on the poorest Han Chinese and the non-Han populations are so great that this has created a tinderbox situation that no amount of government propaganda can defuse or hide, and which plays into the hands of al Qaeda and other terrorist organizations. 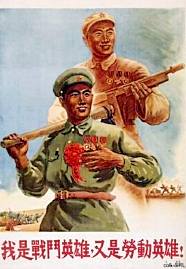 China’s rulers have been so repressive of the Muslim populations that this is setting the stage for radicalization of Muslims who were never before radical, and whose view of Islam is not the kind pushed by the jihadis!

So I was stunned to read Afonso Henriques’s comment “yes, Chinese civilisations ‘seems to be’ superior to ours exactly because, as Fjordman noted, they are not working against their Native population.”

If Fjordman did indeed make that remark he is also tragically misinformed, and clearly outside his area of knowledge when he writes about China.

Whatever horrors China’s Han rulers have done to non-Han peoples within their empire, it’s a drop in the bucket next to what they’ve done to the “Native” Han. Again, this is not just going back into ancient history or even Mao’s reign of terror; this is today.

I asked Fjordman for his reaction, and he sent this in an email:

I don’t have time to make a full post about this today, but you can say that Conservative Swede can be a provocative man, but in my experience there is almost always a grain of truth in what he says. Is Tibetan independence realistic, or even desirable, given its Muslim surroundings? Could an independent Tibetan state survive in the long run?

Just for the record: I do not like the Chinese Communist Party. I do not belong to those people who think that China’s rise to superpower status and global preeminence is inevitable. I have read, and also heard personally, reports from people who have spent a lot of time in China and report about a seriously flawed education system and endemic corruption, among other things. I firmly believe in freedom of speech, and that this gives economic benefits in the long run.

Greater political and individual liberty is one of the most important reasons why Europe pulled ahead of China in the first place, and I do not believe the Chinese will be able to live up to their full potential unless ordinary people enjoy a greater degree of political liberty. And notice here that I do not say democracy, which is not and never has been automatically synonymous with liberty. Just look at the mess the Americans have created in Iraq because of this delusion.

What I have suggested in the past is that the Chinese are not actively suicidal in the way we are right now. Allowing your country to be flooded by hostile aliens is a Western flaw, not a Chinese one. In the United States, there are “whiteness studies” in a number of leading universities where members of the traditional majority population are taught to hate themselves. There are no “Han-ness studies” in Chinese universities where the majority population are taught to hate themselves and to believe that they should be displaced by Bangladeshi Muslims in order to prove their non-racist nature.

China may or may not be the world’s largest economy and leading power a century from now, but I’m pretty sure something recognizable as China and Chinese civilization will still exist, barring an asteroid strike, a new killer virus or some other global disaster that destroys human civilization as we know it. Can we say the same thing about many Western nations?

25 thoughts on “Tibet, the Laogai, and Western Self-Loathing”