I posted earlier about Norm Geras’ essay on the anti-war peanut gallery…you know, the usual fare served up as new gruel – i.e., war is so 20th century that only American neocons are enthusiastic about it.

Now Fjordman sends along a link to Sweden’s decision to cut its military…umm, “strength.” If I remember correctly these are the same folks who wouldn’t participate in any war games that involved Israel. Take a look at their Armed Forces Director. Doesn’t that inspire confidence? 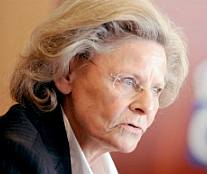 Eksjö, Luleå, Karlsborg and Uppsala will soon be without any military activity, according to documentation presented by Sweden’s Armed Forces after a meeting on Wednesday.

Cost savings at military headquarters are also under consideration.

“[Headquarters] will now offer up their point of view on things that we haven’t taken into consideration, and the plan will likely be changed,” said Armed Forces Director General Marie Hafström during a press conference.

The cuts under consideration are designed to reduce the number of rotations by officials and to review where military competence can be replaced with civilians.

“We will be fewer, but better,” said Hafström.

She didn’t put an exact price tag on how much the military might save through the proposed cuts.
The military actually gets to “save” with these cuts? Or does the money not spent on defense go back into the pot to help with immigrant costs?

Headquarters will now work out the financial ramifications of the various proposals, but that work has not yet begun.

According to the Svenska Dagbladet newspaper, a total of ten military units may be eliminated or moved in order to slow down runaway defence costs and satisfy demands from the government to save money.

The final decision on which units will be shut down will be presented on September 15th.

Per-Ola Eriksson, a governour for Norrbotten County in the far north of Sweden, looked unfavourably on the potential closing of the F21 air wing in Luleå, calling such a move strategically unsustainable.

“I think its strategically unthinkable that Sweden’s northernmost air wing could end up being in Såtenäs,” he said to TT.

What’s your favorite bit here? Mine is “we will be fewer but better.” It has a certain Hillary ring to it…

Poor Sweden. They have to cut back. Everyone’s leaving.