One of our readers, Zenster, left a provocative comment in a recent post. Here is the relevant snip:

“People get the government they deserve. Cultures cannot be entirely absolved of what they have become… While Islam is not the most volitional of systems, there still remains a fundamental personal responsibility that individuals have for steering where their societies go.

As Solzhenitsyn observed in “The Gulag Archipelago”, when the KGB started their midnight arrests of Soviet citizens, if people had stormed out of neighboring apartments and strung up those agents from balconies by their shoelaces, things might have turned out quite differently. If ever there has been a supreme example of people getting the government that they deserve, it is the Soviet Union.”

As I said in my reply to Zenster, Soviet citizens were a different category from the desperately poor, illiterate women of Bangladesh who had been the point of my argument.

But that’s merely the context for Zenster’s comment. It is not the focus of this post. Instead, I want to look at Solzhenitsyn’s observation. Is it true? Do we get the government we deserve?

The long affadavit below – addressed to Her Royal Highness, Queen Elizabeth II – was sent to us by (among others) someone in the UK, a man who is seriously considering following Mr. John Harris’ example. Thus we have here one man, and perhaps another, who have decided to do what Zenster and Solzhenitsyn advise.

In truth, I do not think Solzhenitsyn’s condemnation of his fellow-sufferers is fair. As Gabriel Marcel said of his own experience of the German occupation of France in World War Two, when people are faced with armed tyranny they have only three choices: to give their allegiance to the tyrants, to lie about their allegiance to said tyrants, or to flee them. Marcel, who worked in the Underground, took the second choice, pretending to be a good German collaborator while secretly subverting them.

Mr. Harris’ “lawful rebellion” against The Crown may be an exercise in futility, but if it is, he may still inspire enough of his fellow citizens to follow suit. Will it be enough?

How many people does it take to bring a failing, bullying government to a halt?

What follows is the copy of Mr. Harris’ “Lawful Rebellion”

I now declare my Lawful Intent to the Traitors in Parliament.

On the 22nd day of March 2008 I personally went to Buckingham Palace to serve an Affidavit on Her Majesty the Queen. My Oath, (which has been signed and sealed by a solicitor) states quite clearly, that I now give Her Majesty 40 days to dismiss the traitors that reside in the Parliament of this country. 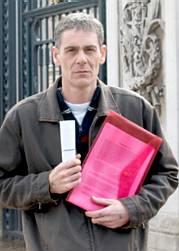 I, John James Harris now declare my right under Common Law of England to Withdraw And Withhold all allegiance & obedience to the Person and Crown of Our Sovereign Lady, Elizabeth the Queen, and those who falsely claim to speak &/or to act in Her Name, and by such action, I will remove myself entirely from the authority of those Evil Persons who now seek to abuse & misuse me in the name of Elizabeth, the Queen and in absolute violation of the Common Law of the People to which I belong.

I hereby place on record of all persons that after said 40 days have expired, being the 1st day of May 2008 and the corrections I seek have not been made, by way of the dismissal of the Traitors in the House of Commons, then I John James Harris, will enter into Lawful rebellion under article 61 of Magna Carta 1215 and therefore will become a Freeman of England within the Freedom of Common Law.

I will then declare myself free from all chastisement, Laws, taxes accorded to the state and any obligations there unto, by way of second and final Lawful Affidavit signed, sealed and served.

In Pursuit of Justice and Right, And in Full Exercise Of My Undoubted & Lawful Duty to My Sovereign Lady, Elizabeth the Queen –

MAKE OATH AND SAY AS FOLLOWS:

AND IT BEING APPARENT TO ME and to a multitude of others that these same evil persons have unlawfully and falsely induced Our Sovereign Lady to give an unlawful effect to legislation that has violated and continues to violate the Common Law: Which legislation further serves to undermine; deny and destroy the Absolute Supremacy of Her Majesty’s Imperial Crown, all to the prejudice of Her Majesty’s People, and in absolute contravention of the right of the people to live in accordance with their own laws and customs (as evidenced by the terms of the Oath that was undertaken by Our Sovereign Lady before Almighty God at the time of her Coronation).

AND IT BEING FURTHER APPARENT TO ME and to a multitude of others that the entirely lawful authority of Our Sovereign Lady the Queen to Uphold & Defend Her People is now so reduced &/or destroyed by the many processes of Treason that have been and are now being employed against Her Majesty’s Authority from within the ranks of those evil persons who have been and are now entrusted with authority to manage the affairs of Her Majesty’s Parliament & Government of the United Kingdom.

AND IT BEING FINALLY APPARENT TO ME that I can achieve no redress to those many grievances that I now have and which result entirely from the Unlawful Conduct of those Evil Persons who now surround the Person and Throne of my Lawful Sovereign, except by means of the lawful process that I now intend.

I NOW PLACE ON THE RECORD of All Persons who now claim to assert a lawful authority over me in the name of Elizabeth the Queen that unless there is correction to the many processes of misgovernment & abuse that have been and are now being imposed on me; with such process of correction being commenced; undertaken; evidenced and given a first and lasting effect within a period of 40 days from this present date.

SUCH PROCESS OF CORRECTION being fully evidenced by Her Majesty’s dismissal of the Assembly of Traitors that is now falsely describing itself as the Representation of the People within the House of Commons AND WITH SUCH DISMISSAL providing the entirety of the People themselves with full opportunity to speak and to act on their own behalf in the election of representatives that are truly loyal to the purposes of Her Majesty’s Throne & People.

THEN I WILL WITHDRAW And withhold all allegiance & obedience to the Person and Crown of Our Sovereign Lady, Elizabeth the Queen, and those who falsely claim to speak &/or to act in Her Name, and by such action, I will remove myself entirely from the authority of those Evil Persons who now seek to abuse & misuse me in the name of Elizabeth, the Queen and in absolute violation of the Common Law of the People to which I belong.

AND I GIVE NOTICE that I will return to my full allegiance to the Person; Estate & Imperial Crown of Elizabeth the Queen only when Her Majesty the Queen is released from the bondage that now prevents her from the free exercise of her lawful authority and duty to Uphold the Common Law that is my birthright and to ensure for all time to come that the government of my country is conducted in full accordance with the laws and customs of my people.

May God in His Mercy, Defend the Right & May God Save the Queen from those who now hold her in an Unlawful Captivity.