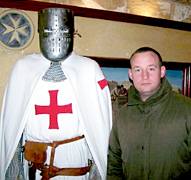 I hadn’t planned to write about Lionheart anymore on this blog, for a number of reasons.

The first one was that his decision to return to his homeland filled me with foreboding; I couldn’t just say “good luck, old boy” and wish him well. Listening to the audio tapes of his conversations with the police, and their refusal to tell him anything of substance, was distressing. It was obvious they didn’t care what happened to him.

The second and even more important factor was what he could face in prison, should the “justice” system in England find him guilty of a sin against the Race Crimes the English Parliament had put in place back in 1988. They certainly prepared ahead of time, didn’t they?

Third, I thought he ought to make a stand that would help his fellow countrymen. If an Englishman has to seek asylum in the US because of the draconian, insane laws of his country it might be enough to begin to make some changes in his homeland.

Fourth, Paul is a private person. Getting the details on his story took a long time…and I may still not have them right. I only give you the story as I understand it. Consider this post my part of the elephant.
– – – – – – – – –

As most of you know, Lionheart’s problems began when he saw the squalid deterioration in his neighborhood, now another no-go area in England. It was the open heroin trade, the prostitution of young girls, and watching his friends go down the hole of narcotics addiction that moved him to complain to the police. I believe he even helped the police before they turned on him. What a sense of betrayal!

At least one of the Pakistani gang members read his blog posts and made a complaint to the police. They also trashed his business, his home, and threatened him with harm. Paul was forced to retreat, to live in his car.

Around Christmas time, when Paul was out of the country, a friend called him to say that he had been contacted by the authorities who wanted to talk to Paul. However, the detective constable (I may not have my terms correct here) assigned to his case was either on leave or on other assignments because he was not available for a discussion of the charges or the likely situation until some weeks later.

When Paul finally did talk to the officer assigned to his case — he just called them up from the US the day before his warrant would go into the system — the results were ominous, in my opinion. They couldn’t protect him in jail, they couldn’t say if he would be held without bond pending trial, and they seemed callously indifferent to his fate. He faced a cold-blooded bureaucratic indifference. He was simply a name, a case to be resolved. “Tell your attorney to call us because we won’t talk to you” was the gist of their advice.

What I also found surprising was the low-tech ineptitude of the police. They didn’t have a tracer on the call, and evidently didn’t have caller ID. They asked if he was in Scotland, perhaps…never having any idea he had the ability to get very far away, to America. It never crossed their minds. After all, what was Paul to them but a lower class, uneducated bloke who could be pushed around at will?

Had they known of his travels, I wonder what, if any, difference it might have made in their bored, complacent attitude? They suspected he was taping the conversation, as I’m sure they were too, but they had no way of proving it and I’m not even sure it was illegal for him to do so. English law is confusing, to say the least. Besides, in for a penny, in for a pound: if they were so hell-bent on getting him to come to the station so he could be “interviewed” (so he could be charged and a date assigned for a preliminary hearing), what harm could it do him at this point to attempt to protect himself by recording the conversation? IMHO.

I was pleased he had done so. However, Paul’s seeming indifference to his fate, even though he was afraid of being killed in jail, left me quite uneasy.

The situation gave Paul pause, too. He was torn between the relative safety of the US and his growing desire to return to his homeland and all that was familiar. His longing for England left him quite depressed and unable to act. It seemed to me he could not envision a life spent among strangers, some of whom were already attacking him (on Gates of Vienna, among other places).

Frankly, I was sick with fear. The very people — the Pakistani criminals — he had reported, and who had been jailed as a result of their activities, would be waiting for him in an atmosphere where he would be alone and unprotected. In fact, long before he left England, he had been reduced to living in his car, his livelihood and his flat destroyed by these people.

A journalist he met took him in during that period before he fled. She gave him shelter when he had no place else to go. Her flat mate was involved in some way with the BNP (British National Party). It is my impression that this person was part of the “new guard” out to change the platform and direction of the BNP to make it a party acceptable to average Englishmen.

Lionheart — Paul — is not politically inclined. It simply doesn’t interest him. He saw no harm in attending some of the meetings while he was living with these people. In fact, I question the desire to tar him with the brush of the past sins of the BNP. How does a party change if everyone ignores their behavior? Individual people have this problem, too. Change isn’t noticed and there is a concerted effort to keep the person you used to know firmly in the cubbyhole to which you first assigned him, no matter how negative that place is.

The obvious incidents of name-calling and condemnation by association that occurred after the Counterjihad meeting in Brussels made me realize that Paul would not be well received in some quarters in the US. In fact, it would turn out even worse: some accused him of fabricating his story. That’s what happens when people decide on a template for their agenda: if you fit the template, then you are bad and must be shunned.

Meanwhile, what of his sojourn in America? Well, since the Luton paper has revealed that he was in South Carolina, I wanted to address that without invading anyone’s privacy.

I’m not one usually given to see God’s intervention in things, but I was amazed at how things turned out for Paul. A man emailed him and offered him a refuge. They were strangers to one another, so it was a leap of faith on both their parts. Paul gladly took him up on his proposal and got on the bus, Gus, to be deposited in the town where he was picked up by his Good Samaritan.

As it was to turn out, not only did he have a place to stay, but this was no mere room in a motel. Paul was given a rent-free condominium for his own use. The family who took him in also invited him to come to their house for family meals. They were very concerned about his predicament.

At that point, the three of us began to talk about the situation, and to investigate the possibility of asylum. Paul eventually found it would take over a year to do the processing, with no guarantee he would be accepted. He never quite got around to filling out the papers, and his heart was longing for home.

I confess that his decision to return made me angry and depressed. I had invested so much in the notion of his safety that it felt as though he was Daniel returning to the lion’s den. However, I also told him he was every bit as immovable as the saint whose name he carries: Saint Paul was quite stubborn — as you can see on reading his Epistles. Our modern Paul should take up tent-making just to keep the story congruent with the letters to the early church.

As he flew back to England, having found a place to stay, I will admit I shed a few tears of frustration, abandonment, etc. In addition, I knew the people in South Carolina who had taken him in were distressed, too. We all feared for him.

The fact is that Paul’s departure left a cloud of depression on everything. I knew I would continue to support him as I’d outlined in my covenant to him, but my heart had gone out of it.

I wrote Paul and his American host before beginning this post so that they would know it was going up. I had been reluctant to do so before, fearing that it might be an invasion of privacy. However, now that the story has appeared in the Luton paper, the cat is out of the bag so telling of my part in his not-so-excellent adventures does no harm.

The police in Bedfordshire continue to be indifferent, even arrogant. Here’s their statement in the Luton article:

A spokeswoman for Bedfordshire Police said: “I can confirm that someone has been arrested on suspicion of inciting racial hatred and has been released on police bail to return in May.

“He hasn’t been charged but if he chooses to identify himself then that’s his concern.”

In other words, charges against him are “pending.” How’s that for a sword hanging over your head? Arrested, but he’s not charged. He will be charged if he doesn’t show up in May, perhaps to be imprisoned for said charges. The fine legal point seems rather moot to me. Obviously, the police are aware they’re enforcing an idiotic law at great cost to the English taxpayer. But, hey, it’s just money, right? What is that in the face of the great behemoth of Multicultural dogma?

I’m glad I was able to be a part of Paul’s journey for a while. I will continue to stay in touch with him as long as his email stays current. And, no doubt, there will be some miniscule mention of his fate in England’s tabloids.

His story is worth telling, and I hope he does take the time someday to put it down on paper. On the other hand, as I told him one time, I will never be his editor. I would have to bang him on the head with a board to get him to change one jot or tittle of what he writes. In fact, Paul may be editor-proof because he would no doubt give up publishing a book if anyone dared to take a blue pencil to his words. You’d think he was Irish. In fact, I’ve found Hungarians easier to edit than Lionheart. Definitely, Saint Paul is chortling, even now.

My thoughts and prayers go with him, wherever he journeys. I plead with the cosmos to keep him from being killed by terrorists who want revenge and are anxious to silence him so they can keep pouring heroin and child prostitutes into Paul’s homeland.

I pray for England.

12 thoughts on “Breaking My Silence on Lionheart”