What with one thing or another, in recent weeks I’ve managed to turn procrastination into a fine art. 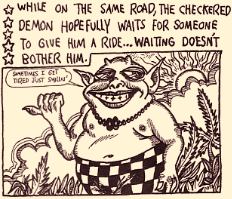 Last weekend I attended Fausta’s Spring Blogfest in Princeton, NJ, and here we are with only a little bit of Wednesday left, and I’m just now getting around to writing about it.

It didn’t help that I left my camera in the hotel room, so I don’t have any entertaining photos to post. Rather than borrow some from the other bloggers, the Checkered Demon will have to fill in, and you can click the links below to see the photos that everyone else took.

The bash took place at the Triumph Brewing Company right across from the campus. Needless to say, this primo location kept the price of drinks at the cash bar high enough to ensure that only the rich could get toasted. None of the guests at the Blogfest could be called rich — we are, after all, bloggers — so the evening’s revelry never got out of hand.

Not only that, one of the favorite beverages of the establishment was allegedly chocolate vodka, so being abstemious had its advantages.

There were hors d’oeuvres to start, then a sit-down dinner, and ample conversation throughout.

Judging by the conversations I heard that evening, Princeton is a progressive university town that makes Charlottesville look like a backwater of Bozart reaction in comparison. According to Fausta, virtually every conservative Princetonian was present in the room that evening, so that a well-timed pipe bomb from the anarchist brigades could have wiped out the entire local chapter of the Vast Right Wing Conspiracy.
– – – – – – – – –
I already knew the hostess as well as some of the guests, including Tigerhawk, Judith of Kesher Talk, and Eric of Classical Values. I finally got to meet some people whose blogs were familiar to me, notably Denny the Grouchy Old Cripple (who’s not in the least grouchy), and Mr. Bingley of The Coalition of the Swilling.

Some of the other folks I talked to were Theresa of Tecnicalities, Suzette of Cripes Suzette, Erica of her eponymous blog, and the Sad Old Goth (who’s not sad, as far as I can tell). There were a couple of non-bloggers there, including a commenter named Luigi, and another fellow known as “The Bodyguard” whose antics are described in some of the posts linked above.

Many other people were there that night whose names and blogs I have forgotten — I should have taken notes!

A side note: from Fausta I learned about a new health hazard known as “death by blogging”. See her blog or Eric’s to learn more about this ominous malady.

We’re all lucky we survived.

4 thoughts on “A Road Trip to Princeton”