The Danes are not the only Scandinavians who practice the Great Islamophobic Mojo and thus offend all 1.94 quintillion Muslims in the known universe.

Sweden tends to cower behind the flimsy shelter of Multiculturalism in hopes of warding off the evil eye of Islamic domination. But not all Swedes are so timid: Lars Vilks, the creator of the infamous and deadly Modoggies, has repeatedly displayed the fortitude required to take on the Great Jihad.

Before I post Mr. Vilks’ latest fatwa-bait, an explanation of what he is doing is in order.

Lars Vilks understands the scope of Sweden’s political correctness as well as the vulnerabilities of the thin-skinned and perpetually offended Muslims. In his genius he has produced the perfect artistic blade, one which can penetrate both the armor of Multiculturalism and the shields of its radical Islamic allies.

Sweden is perhaps the most homophilic country in the world. Not only do the Swedes tolerate alternative sexual lifestyles, they celebrate them continuously. Every year “Pride Week” draws the most prominent of Sweden’s politicians to march alongside the transvestites, the transgendered, and the transgressive transsexuals.

Nobody can outdo Sweden in the promotion of gay culture.

At the same time, nobody can outdo the Swedes in Multicultural tolerance, to the extent that it is virtually forbidden in polite society to discuss forced marriages, the incidence of immigrant rape and other crimes, and the “honor killing” of teenage girls who dare to violate their family’s cultural mandates.

Lars Vilks, with his absurd cartoons, has discovered a way to tweak the mandarins of Swedish multiculture whilst also drawing the ire of the mullahs and the imams.

On Thursday he posted his latest outrage on his blog: a drawing of Mohammed visiting a gay bar.

Our Danish correspondent TB has translated the caption under the drawing. To help explain the context, TB points out that Mr. Vilks, in “Surah 116”, is referring to recent news stories (see here and here) about a move by the Swedish government to make sex education mandatory in the schools, eliminating all religious opt-outs.

Here we have the Prophet who has slipped into a gay bar in Stockholm to catch some speedy lyric poetry with coffee and a highball. Then came Surah 116 (the surah of breeding and swimming) in the Quran:

Allah is the only one
Who does not breed
Humans breed, however
And therefore have to be taught
in this art
As the school board has said

The swimming we have made into an exhortation
About resurrection
And for the benefit of all those
Who move forward on the ocean
Let the veil and the clothes fall
Before you walk into
the municipality’s swimming pool.

The original Quran has 114 surahs. In the year 2001 came Sura 115, the multicultural surah called The Surah of Bandy [a Swedish game, ice hockey without the ice — translator].

The genius of Lars Vilks’ artistic actions lies in their exposure of the contradiction inherent in Sweden’s official multicultural policy.

Islam and the celebration of homosexuality are incompatible. They simply cannot be reconciled.

According to Orthodox Multiculturalism, “alternative” lifestyles are not only tolerated, they are to be encouraged.

Also according to Orthodox Multiculturalism, diversity is to be celebrated. As a corollary, “diverse” cultures in all their rainbow splendor are to be welcomed and their customs embraced. No culture is superior to another; all are equally valid and praiseworthy.

Yet Islam, the most prominent beneficiary of Multiculturalism in Sweden, refuses to tolerate homosexuality.

This paradox will overload the collective circuitry of Sweden’s bien-pensants. 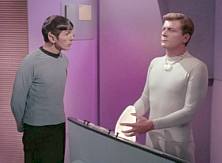 It’s reminiscent of the episode “I, Mudd” in the second season of the original series of Star Trek. In that episode Mr. Spock outwits Norman the android by confronting him with a version of the Liar’s Paradox (also called Epimenides’ Paradox). Norman’s primitive program is unable to evaluate Mr. Spock’s statement; his android brain overloads, short-circuits, and seizes up. Smoke comes out of Norman’s ears, and he is incapacitated.

Expect the same thing to happen to polite society in Sweden.

And what then? We’ll just have to wait and see.

10 thoughts on “The Prophet Cruises the Bar Scene”