AnsaMed relates the spin Hamas is putting on the murderer of the Yeshiva students in Jerusalem: 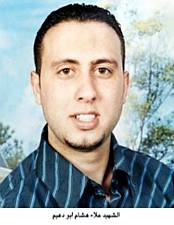 Hamas is trying to transform the violent attack from two weeks ago against the rabbi college Merkaz ha-Rav in Jerusalem into a kind of a parable: the website of its armed branch reported alleged paranormal phenomena seen during the funeral of the attacker, Ala Abu Dheim.

Testimonies accompanied by a short video made with a cell phone during the burial pretend to demonstrate traces of sanctity on the remains of the Palestinian.

This form of propaganda is unprecedented for armed Palestinian groups which so far usually spread videos made by the suicide bombers before the attacks.

This is an “exclusive” video, as proudly announced by the website of the Ezzedin al-Qassam Brigades which is very popular in the Territories and the Arab world.

This samizdat hagiography does not seem to be available on the internet…yet. It sounds much like the photos which Aunt Hattie swears, “don’t that cloud look just like Jesus? Hey, Buster, come look at this…”
– – – – – – – – –

The images show Abu Dheim covered in a white shroud: his face is shown first, looking serene, then the body, then again the face. The images are now passing from hand to hand in east Jerusalem and in the Palestinian Territories, they are even transferred from one cellular phone to another via bluetooth.

As I said, samizdat…and a very credulous population. The saintliness of this murderer thereby ameliorates the fact that he killed eight unarmed students. What a dude…next they’ll canonize him.

Oh, wait, they already have:

Mahmoud Abbas’s official Palestinian Authority daily newspaper has honored the killer of the eight high school students gunned down this week with the status of Shahid – Holy Islamic Martyr. In so doing, the PA is sending its people a straightforward message of support for the terror murders and the murderer. According to the PA interpretation of Islam, there is no higher status that a human being can achieve today than that of Shahid.

The official PA daily Al Hayat Al Jadida prominently placed a picture of the killer on the front page, with the caption, “The Shahid Alaa Abu D’heim.” In a Page One article on the terror killings, his act is again defined as a “Shahada achieving” action.

Meanwhile, AnsaMed continues with the narrative of this holy phenomenon:

Abu Dheim, it is explained in vivid details, was dead for a week “yet he did not have any particular smell”. On his face was read “the shadow of a smile”, and on his cheeks and under the chin “hairs of beard appeared”: a respectable thing because, according to the relatives, before leaving for the attack at the rabbi college Abu Dheim he shaved himself.

And so the mythology will continue to build.

The great flaw of the medieval-minded Palestinians is that they have 21st century technology in a bloody, primitive 8th century culture. How could they be anything but deadly? The envy of those who have thrived on the scientific method continues to corrode the Middle Eastern Arabic soul.

I guess they’re stuck with what they have: videos of “martyrs”; videos of beheaded infidels, it’s all the same.

The theme is death.