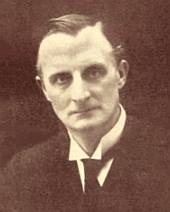 Sir Edward Grey was Foreign Secretary in the Asquith government at the start of the Great War in 1914. His name is well known, not because he was a remarkable or accomplished Foreign Secretary, but simply because he had the misfortune to occupy his office at the historical moment when European civilization decided to destroy itself.

He did, however, leave us with a statement which became an epitaph for Europe prior to 1914. Just before the war began he said to a friend, “The lamps are going out all over Europe; we shall not see them lit again in our lifetime.”

He was quite right; the lamps were not re-lit within his lifetime, nor within the several lifetimes that have elapsed since. In fact, it is doubtful that they can be rekindled in time to illuminate a continent that could recognizably be called “Europe”.

The Great War gutted the vital core from Europe. Western Civilization still manages to lurch along, but its beating heart no longer resides within Europe.

Sir Edward Grey comes to mind because the year 2008 is starting to look a lot like 1911 or 1913. Events in disparate parts of the globe, but particularly in Europe, are converging again. Another grand spectacle seems to be in the offing, but this time it doesn’t promise mud and trenches and military stalemate. There won’t be any mobilization or declarations of war on this occasion. No Western Front or armistice will make the coming conflict neat and well-defined.

Civilization will collapse piecemeal and in slow motion, but collapse it will.

Back in August I wrote about “the Year of the Jackpot”, the idea that cataclysms in human affairs occur when cyclical curves of varying periodicity all bottom out at the same time.
– – – – – – – – –
In my post I mentioned the constitutional crisis in Belgium, the instability in Pakistan, the Iranian nuclear program, and the possibility of a Hillary Clinton administration.

Since then the world has given us six additional months without a real central government in Belgium, the assassination of Benazir Bhutto, the repudiation of Musharraf’s faction in Pakistan’s elections, the continuing defiance and determination of the mad mullahs in Tehran, and the rise of Barack Obama.

To these we can add the renewed Motoon crisis in Denmark, the signing of the Treaty of Lisbon, the freefall of civil society in the UK, the crisis in Chad, the independence of Kosovo, and a possible global economic slump triggered by the subprime mortgage crisis.

No, none of those curves is rising yet, and none of them has finished bottoming out.

Then there’s the increasing suppression of free speech through the Western world. The USA experienced the first little shiver of the coming winter a few days ago in the St. Louis minaret incident, but in Europe and elsewhere the puddles are freezing over rapidly.

Perhaps we should start keeping a central registry of people, blogs, or publications that have been censored in the name of political correctness, because the list is becoming rather long: Paul Belien, Mikko Ellilä, Lennart Eriksson, Ezra Levant, Lionheart, Dahn Pettersson, Mark Steyn, and Tomashot, just to name a few off the top of my head.

So when will all these curves simultaneously reach their nadir?

2009 is one possible candidate. The Treaty of Lisbon will go into effect then, and the EU will begin the formal integration of its member states into a single “soft totalitarian” regime which will gradually become harder.

The new Wahhabist state in the Balkans will be a year old.

Dozens of additional young women will have been flung from balconies in Sweden by their male relatives.

Pakistan will have seen another year of seething, intrigue, and assassination.

The jackpot may be delayed a little while longer; after all, it may take until 2012 or 2015 until the Iranians have a fully deliverable nuke. Pervez Musharraf may yet avoid the car bomb with his name on it for a while longer. The “youths” of the Parisian banlieues may not storm nearby bourgeois neighborhoods for a couple more years.

But the lamps are definitely being extinguished. You can see them winking off one by one.

Turn the last one out when you go, would you?