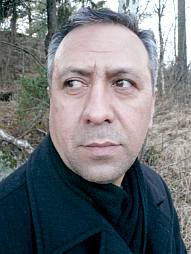 You might remember that a while ago I sent you an article (see news report below the jump) about a Norwegian resident who is fatwa-convicted of blasphemy.

The man is Mariwan Halabjaee, a prolific writer and intellectual of Iraqi Kurdistan. After the release of his latest book Sex, Sharia and The History of Women in Islam (2005), which is highly critical of Islam and the moral qualities of the Islam-inventor Mohammed, Halabjaee received a fatwa on his head from Kurdistan’s “High Commission for Fatwa”, sentencing him to death, unless he repent and publicly apologize his blasphemous writings. Halabjaee thus fled his home country, taking his pregnant wife and three children along with him, and sought refuge in Norway, where he now lives in hiding.

I personally met with Halabjaee at a secret location in Norway, and obtained a TV-interview with him; the first he has given since after he fled Kurdistan. Halabjaee spoke neither English nor Norwegian, so I had to have a translator along with me. The result is this little film, published on YouTube.

I had to overcome some technical obstacles in learning how to edit multimedia material, but now that I have thrown myself into it, film is something I plan to do more of.

I am already in contact with one more refugee who has had to flee his home country after receiving death threats from Islamists, simply for publishing material criticizing Islam. These people feel isolated and forgotten, and I believe that we have an important mission in lifting them up, making them visible and getting their voice on record (before it is too late).

Who knows, perhaps this can develop into something like a series of portraits of people who are persecuted by Islam? So if you know of persecuted people living in Europe, people you think ought to come on air, please send me the information.

Mariwan Halabjaee has been called the Salman Rushdie of Kurdistan. As an established writer and prolific intellectual of Iraqi Kurdistan, Halabjaee in 2005 published the book “Sex, Sharia and Women in The History of Islam”. Deemed blasphemous by the Kurdistan High Commission for Fatwa, the Islamic League of Kurdistan issued a “conditional” fatwa to kill him if he did not repent and apologize for writing his book. Thus forced to flee his home country, taking three children and a pregnant wife along with him, Mr. Halabjaee was granted asylum in Norway, were he now lives in hiding.

This is the Aftenposten article from January 8 of this year:

Two years ago author Mariwan Halabjaee wrote “Sex, sharia and women in the history of Islam”. Here he wrote that the prophet Mohammed had 19 wives, married a nine-year-old when he was aged 54 and that he took part in murder and rape. Last month a court in Halabja convicted him of blasphemy in absentia.

Halabjaee has lived in hiding in Norway for one and a half years. The sentence states that he should be arrested upon his return to north Iraq but he has now been granted asylum in Norway, newspaper Bergens Tidende reports on its web site.

The writer has had 14 books published. Halabjaee says that he has received a series of death threats and that there is a fatwa saying he should be punished by death unless he asks forgiveness.

Halabjaee also believes Norway is naive about radical Islamist groups that he says authorities allow to develop without control on Norwegian soil.

“Norway has protected me against the terrorists and I hope to be able to play a role in this democratic system. But I am alone and feel imprisoned. I have little contact with people and have to move carefully. Even if I have lived here a year and a half no cultural or other organizations have contacted me,” Halabjaee says.

The key sentence here is Halabjaee’s wistful plaint, “…I hope to be able to play a role in this democratic system. But I am alone and feel imprisoned. I have little contact with people…”

I think Lionheart in this country feels much the same way: missing Britain and cast-off just for telling the truth.