This is the third in a series of letters from AMDG at La Yijad en Eurabia.

As indicated in my previous letter, while it is not evident that any conservative strategy will be able to count on the Popular Party (Partido Popular, PP) as the major party of the right, most of PP’s leaders are actually “libcons”. Consequently, the tactic proposed to confront that situation is to promote the advance of anti-immigration, populist parties that would keep in check the liberal leaning of the PP (I use liberal in the American sense, meaning progressive). The rise of those parties is expected to force the PP to act as a conservative party, even though keeping a certain amount of liberal rhetoric is acceptable, or even necessary.

I dedicate this post to investigating the parties better suited to implement that strategy, and I propose that they should focus on the local political level at this stage.

There are some alternatives to the right of the PP, all of them with a very reduced significance. The aim of the counter-jihad should be to help them to get at least one seat in Parliament, even if this is still daydreaming in Spain.

Which are those parties? I would divide them into moderates and radicals. The radicals follow in most cases a strategy that can only discourage sensible voters. The left must actually be very happy with them; does it actually operate them by proxy? If there is any hope, it would of course lie with the moderates. I have been able to spot only two of those Spanish moderate parties that oppose Islamisation: Alternativa Española and Iniciativa Habitable.

The first (AES) is a conservative Catholic party with some anti-libertarian whims (not really worth concern). They define themselves as “Catholics in politics” more than Catholic politicians, and they started in 2003 as a reaction to those progressive measures of the PP. They resented especially that the PP had then a majority in the parliament, yet the PP implemented many liberal policies (Spanish), and this is precisely the kind of party I am looking for. 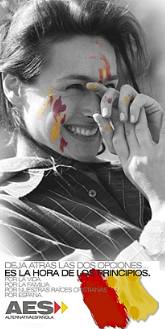 I have only a few buts. Their insistence in some topics — i.e. abortion — is somehow tiring, even if extremely relevant both from an ethical point of view and from a plain political view in the current demographic situation of Spain. Their web site has a cumbersome navigation scheme and discouragingly lacks interactive possibilities. As far as immigration is concerned, they reject racism and xenophobia but also the current uncontrolled invasion. They propose to favour controlled immigration, prioritising those with a background that is “Hispanic and culturally close to ours”. I think this is fair enough if it is strictly implemented and not just a rhetorical statement.

The second party I am focusing on is Iniciativa Habitable (Leefbar Initiative, so to speak). It is a more recent party; a real grassroots one. They have no past and a very discreet present; their future is a big question mark. You can see here the statistics of their web page, with an average of 50,000 pages visited weekly. They have translated some articles from the Brussels Journal. Look at this: IH proposes restricting the concession of Spanish nationality. Concessions as from 1985 should be revised (Spanish). As far as I know, no other Spanish party has a similar proposal. Only for that, they have my support (and my vote in local elections).

The fact that they have no past can be an asset in Spain, to avoid being associated with the extreme right, the Franco regime, and so on. But their present is very discreet. They are actually a group of friends who decided it was the time to do something more than regretting the situation. I met the co-ordinator, Manuel Leal, and Alberto Grasa last Christmas. I saw honest, reasonable citizens concerned about the future of their children; I decided immediately to help them.
– – – – – – – – –

The party has not any relevant infrastructure nor financial means to compete in national elections; they will not even try it. Still, they were successful in the last local elections (2007), even if they only participated in a few villages and small cities. Their name has started to be heard here and there. I am convinced that, in Spain, the local elections are the entry key for the anti-Islamisation and anti-immigration parties. At that level, they are immune to the accusations of “racism”, “intolerance”, “fascism”, etc. because the neighbours know the candidates personally in many cases.

There is a third interesting party, Plataforma per Catalunya (PxC). As you can guess by the name, their scope of action is just in Catalonia. They got a modest success there in the local elections in 2003 (4 concejales, representatives in a city council) that they multiplied to 17 concejales in the last ones (2007). It is just 17 concejales out of a total of 8,932 in Catalonia, but their influence can be measured by the hysteria generated among the mainstream parties. It was funny to see them all against PxC, a newcomer.

Their leader, Anglada, has a right wing neofranquist background. The Spanish entry in Wikipedia indicates that he was a candidate of Frente Nacional in the 1989 European parliament elections. This is sometimes agitated against him by the left, and even by the “moderate” right, but, as the results of the local elections show; this trick is losing the effectiveness it used to have.

This is the situation, and these are the conclusions: First, there is no anti-immigration or anti-Islamisation party with a seat in Spanish Parliament, nor is it foreseen in the near future. The strategy I would propose is to influence the policies of the Popular Party. The best tactic for this strategy is to promote the advance of anti-immigration parties at local level. I have found two that meet my requirements.

I am of course open to your comments and questions. My next post will be a status report on Spanish immigration.

8 thoughts on “Letter from Spain: The Popular Party and Some Other Popular Spanish Parties”