The paperback edition of Dr. Andrew Bostom’s book, The Legacy of Jihad (complete with a new preface) is due out this Spring. The following review from The Winter 2008, Middle East Quarterly is by Professor Johannes J.G. Jansen, whom Bostom calls “the Netherland’s leading contemporary scholar of Islam.”

He also credits Jansen’s work as definitive examinations of the Islamic movements that gave rise to Al Qaeda. 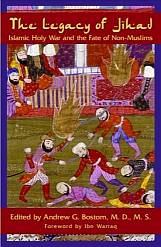 The re-edition of this remarkable book in paperback form will make it accessible to more people. However, if you can afford it, I recommend the hard-bound version. It’s a lovely book just to have.

Bostom’s book amply documents the systematic and destructive character of Islamic jihad, refuting the much-repeated argument that jihad is a “rich” concept that has many meanings and that jihad first of all signifies “inner struggle.” Jihad is first of all war, bloodshed, subjugation, and expansion of the faith by violence. The book implicitly devastates the fashionable but uninformed opinion that all religions are elaborations of the Golden Rule. Jihad is everything the Golden Rule is not. [my emphasis – D]

Jihad has been extremely effective and has served Islam well. In the light of this success, it can hardly be expected from Muslim leaders that they renounce jihad for more peaceful methods for propagating their faith. Renunciation of jihad would simply not be in the interest of Islam. But it would, to the contrary, be very much in the interest of the rest of the world. How should the rest of the world react to Muslim insistence on the legitimacy of jihad? Do modern, free, and democratic societies have the stomach to withstand jihad? This question becomes more and more important when jihadists see themselves increasingly not as an alternative to Christianity, Judaism, or any other faith but as an alternative to democracy. One almost gets the impression that present-day jihadists fervently desire to add Islam to the list that starts with Nazism and communism.

Bostom not only presents us with classical mainstream Islamic sources and their justifications for jihad, plus witness reports from victims that survived by accident, etc., but he also quotes contemporary Muslim clerics. For example: Yusuf al-Qaradawi (b. 1926) discusses “martyrdom operations,” a relatively new tactic of jihadists. Are such operations jihad or suicide? This is an important question because Islam forbids suicide. Luckily Qaradawi, regarded by many in the West as a moderate, knows the exact difference between suicide and a martyrdom operation. Someone who kills himself is “too weak to cope with the situation” in which he finds himself. “In contrast, the one who carries out a martyrdom operation does not think of himself. He sells himself to Allah in order to buy Paradise in exchange.”

If this is how the moderates reason, what can we expect from the radicals?

Answer? Not much…
– – – – – – – – –
Dr. Bostom’s book is not easy to read, but it is worth the effort. Besides having to wade through the descriptions of the Islamic ritual of making piles of Hindu heads, you come across fascinating bits of history.

For example, the people we now know as gypsies fled from the Muslim invasions into India. They gradually made their way across the world, the first exodus coinciding with the Arab invasion of Sind (India). Surprisingly, the Roma are of Hindu stock, though many later converted to Christianity. Nonetheless they maintained their Roma identity. “Roma” means simply “man”, and they referred to themselves as Roma chave, or “sons of Rama,” the Indian God:

Even today, a visit to the new community of Romanies in Skopje in the southeastern part of Yugoslavia is like entering a village in Rajasthan…with regard to their language, a large number of the words in different dialects are of Indian origin…as their persons and customs show much of the Hindu character…

Dr. Bostom has a full account of the Armenian genocide – you know, the one the Turks say didn’t happen. Turkey stonewalls better than the USSR ever did. On the other hand, they’ve had more practice at it.

What I find amazing is that he managed to write this amazing compendium while maintaining his medical practice. Truly productive people are examples to the rest of us, we of the couch potato brigade.

4 thoughts on ““Jihad Is Everthing the Golden Rule Is Not””