Fox News – all of the MSM, for that matter – must have a template by now for rioting Muslims. It probably goes something like this:

In front of thousands of cheering citizens in [capitol of Islamic country] [leader] said on [date] that [country] called on all of Islam to boycott Danish commodities.

[Esteemed Leader] said that Denmark had done the unthinkable by printing cartoons of the Prophet (pbuh). In retaliation, [country] was going to refuse further aid from Denmark, claiming it was contaminated money. [Country] was sure Saudi Arabia would come to help with petro dollars to replace the kroner it planned to return so as to avoid Danish cooties.

Actually, here’s the scoop on the government-backed demonstrations from the Sudan, as reported by Fox News. Let’s just say that boycotts can work both ways, if the Danes are inclined to get tough: 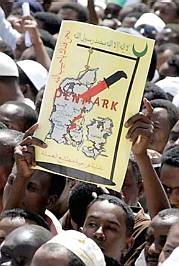 Sudanese President Omar al-Bashir said Wednesday he would bar Danes from Sudan and told tens of thousands of people at a government-backed rally that the Muslim world should boycott Denmark because of a reprinted cartoon of the Prophet Muhammad.

“We urge all Muslims around the world to boycott Danish commodities, goods, companies, institutions, organizations and personalities,” al-Bashir told the crowd outside the Republic Palace in downtown Khartoum.

“Down, down, Denmark!” shouted the protesters. Al-Bashir vowed that “not a single Danish foot will from now on desecrate the land of Sudan.”

In reality, it seems that Danish feet will have to leave Danish Red Cross projects if Omar al-Bashir is anything more than a windbag:
– – – – – – – – –

Sudan is one of the largest recipients of Danish aid and Danish aid groups that operate there include the Danish Refugee Council and the Danish Red Cross, which runs large projects to alleviate suffering in the western Darfur region.

What is the likelihood that ol’ Omar would stop the aid from Denmark to Darfur? Or would that move interfere with whatever skimming the local Janjaweed may have been doing as they proceed with their planned genocide?