Do you remember Fabrizio Quattrocchi?

He was an Italian civilian who was held hostage in Iraq by Muslim terrorists and eventually murdered by his abductors. Unlike so many of his fellow Western hostages, who went whimpering and pleading to their deaths, Mr. Quattrocchi ripped the hood off his head and shouted, “Now I’ll show you how an Italian dies!” just before he was shot to death.

Denmark is doing something similar. Collectively — as a nation — it is saying to the Great Jihad, “Now I’ll show you what a Dane thinks of death threats!”

Steen and TB have been keeping me informed of the responses in the Danish media to yesterday’s arrest of the Muslim terrorists who plotted to kill Kurt Westergaard. Mr. Westergaard is the artist who drew the famous and iconic “turban bomb” cartoon of Mohammed, one of the twelve Motoons that so inflamed the “Muslim street” back in early 2006.

Below is the front page from this morning’s Morgenavisen Jyllands-Posten (photo by Steen): 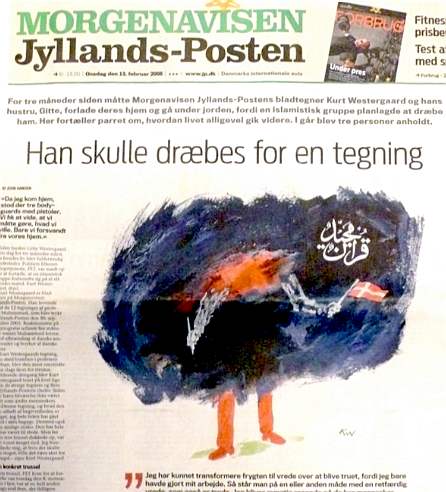 The headline reads, “He must be killed for a drawing.”

The drawing is a new self-portrait of the cartoonist standing in the midst of a Allah-bomb explosion, with one arm holding a Danish flag, and the other holding a pen. The text below the cartoon is too hard for me to translate easily, but it’s similar to yesterday’s quote from Mr. Westergaard:

I have turned fear into anger and indignation. It has made me angry that a perfectly normal everyday activity which I used to do by the thousand was abused to set off such madness. I have attended to my work and I still do. I could not possibly know for how long I have to live under police protection; I think, however, that the impact of the insane response to my cartoon will last for the rest of my life. It is sad indeed, but it has become a fact of my life.

Steen says the turban bomb cartoon was on the front page of all seven of today’s major Danish dailies, plus the tabloids. Visit his blog to see a photo of a pile of this morning’s newspapers: turban bombs as far as the eye can see.

According to some of my other Danish contacts, billboards and posters of the drawing are prominent all over Copenhagen.

The murder threats against the artist Kurt Westergaard show that Jyllands-Posten did the right thing when they published the Mohammed drawings.

More than two years ago Kurt Westergaard— for many years an artist for Jyllands-Posten — sat down at his table and drew the lines that were to trigger the biggest crisis in the history of recent Danish foreign policy. And, as we now know, it would also jeopardize Westergaard’s own life.

Tuesday it was clear to us that the drawings, after two and a half years, still create such hatred that Muslims living here are ready to kill because of them.

Everybody can distance themselves from the murder plans. But no one discussing it, no matter what he might think about the drawings in Jyllands-Posten, has the slightest understanding of this horrific act which, according to PET, was being planned: the killing of Westergaard. So far, so good.

Meanwhile, in an absurd way these murder plans are evidence that Jyllands-Posten, in spite of the appalling consequences, did what was necessary by challenging some Muslims’ views on democracy and freedom of speech.

JP was right; Politiken was wrong

Since the crisis, commentators such as Tøger Seidenfaden have tried to make us believe that Jyllands-Posten’s sole mission was to insult Muslims by stepping on their holy prophet; on the other hand Jyllands-Posten has argued that the drawings needed to be published so as to draw attention to the fact that freedom of speech is sacred, and that the right to think, speak and draw freely is threatened.

The critique of Jyllands-Posten must now become silent. Feel free to call it a provocation, but it was a necessary provocation. Not all of the drawings where of equal quality, but Westergaard’s was good, and it was right: It was spot-on cartooning to create Mohammed with a bomb in his turban, not to insult Mohammed, but to tell an alarming truth: that the vast bulk of the terrorism that we have been witnessing in recent years is committed by Muslims in the name of Mohammed. Therefore Westergaard’s drawing was not only allowable, it was right and true.

The blinkers of the left

The left attacked Tuesday — yes, rightly — the questionable policy in which the authorities can suspect someone of murder and then deport them without trial. But this is not the major problem of our society.

The big challenge for this country is that there live among us young people with a Muslim background who are ready to create bombs and kill artists. Ready to kill in the name of their god.

So this is how Denmark responds to Islamic rage. The Muslims will just have to deal with it.

It’s important to remember that Mr. Westergaard is not the only cartoonist who lives under threat, and Denmark is not the only country facing Islamic intimidation. Lars Vilks, the Swedish artist who gave us the Modoggies, has also received death threats.

Our Swedish correspondent Carpenter wrote us this morning:

As you know, a terror plot against Kurt Westergaard was recently discovered and thwarted in Denmark. And now it has been discovered that followers of a certain religion have been in possession of a map of Lars Vilks’ house and documents on military night-vision binoculars:

The Local has the story, quoting from today’s Dagens Nyheter.

In the online version of Dagens Nyheter’s article, no Mohammed cartoon appears. But in today’s paper version they printed a small-size Modoggie. Thought I’d mention it!

I don’t subscribe to Dagens Nyheter. Like all Swedish media it’s Multiculturalist, PC and has a “culture section” (DN-Kultur) that is Hamas-supportive, “climate aware”, feminist, Communist, frequently compares Denmark to Nazi Germany, and nowadays lets Hizbullah supporter Andreas Malm write brain-dead articles on the “Rise of Islamophobia” in Europe caused by Bat Ye’or, Mark Steyn and Bruce Bawer, among others… I’m very reluctant to pay one single penny to such a paper. I discovered that they printed old Mo at my regular coffee shop.

Here’s the story from The Local:

Sweden’s Economic Crimes Bureau (EBM) has confiscated a map of the Skåne home of artist Lars Vilks, along with documents on military night-vision binoculars.

Skåne police and Vilks say they were not informed of the raid which led to the find.

The seizure was conducted in November during a house search carried out against two men in the Stockholm suburb of Spånga.

“This sounds like the most serious threat thus far because it appears to have been planned out,” said Vilks to Dagens Nyheter.

One of the men, 42-years-old, is suspected of crimes related to the embezzlement of money from pre-schools in Tensta and Rinkeby.

The Swedish Security Service (Säpo) suspect the 42-year-old and others may have funneled money from Sweden to foreign terrorist organizations.

Both Torsten Elofsson, head of the criminal police department for northwest Skåne, and Thomas Servin, head of Skåne’s police intelligence division, deny having been informed about the seizure of the map.

Last July, a local farm in Värmland planned to hold an exhibition of Vilk’s drawings featuring the prophet Mohammed as a roundabout dog.

The drawings were removed from the exhibition, but they were later published in several newspapers.

A drawing featuring the head of Mohammed on the body of a dog appeared in the local newspaper Nerikes Allehanda, leading to a storm of protests against Sweden in several Muslim countries.

Both the newspaper’s editor and Vilks received death threats following the incident, with Vilks eventually getting police protection.

Denmark has responded to Muslim bullying by spreading insulting cartoons of the Prophet as widely as possible.

How will Sweden respond if a comparable Modoggie crisis erupts? We’ll have to wait and see.

16 thoughts on “Denmark to the Jihad: Drop Dead”