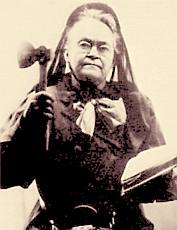 Americans of the Midwestern persuasion will need no introduction to Carrie Nation.

She was a member of the Women’s Christian Temperance Union in the late 19th century, and a zealous crusader against the evils of alcohol. Notorious for breaking up barrooms with a hatchet, she did battle fearlessly against the Demon Rum.

But modern Muslim purists put Carrie Nation to shame. The Halal Warriors are always alert to the slightest taint of pork or alcohol in the production of food. If you’re a food manufacturer, you’d better hope that none of your employees even thinks about beer while preparing your products.

The latest news comes from Britain, where the Halal Warriors are doing battle against crisps (known here in the colonies as “potato chips”) which may have been processed with a teeny-weeny bit of ethanol. According to The Daily Mail:

Furious Muslims have heavily criticised Walkers crisps after it emerged that certain varieties of the manufacturer’s products contain trace elements of alcohol.

Some crisp types use minute amounts of alcohol as a chemical agent to extract certain flavours.

Mr Rehman told the paper: “A customer informed us that Sensations Thai Sweet Chilli and Doritos Chilli Heat Wave are not on Walkers’ alcohol-free list. Our suppliers were unaware of this.

“Even if it is a trace amount of alcohol, Walkers should make it clear on the packaging so that the customer can make an informed choice.”

If there is a single molecule of ethanol in any crisp, then Muslims must be told!

“I feel frustrated and angry. I have let my customers down simply because such a big company like Walkers is not sensitive to Muslim needs.

“Many of them were my daughter’s favourite crisps. As soon as I found out about the alcohol in them, I called home to ask my wife to throw out all the packets.”

Not only that, Muslims are offended:

Shuja Shafi, who chairs the food standards committee of the Muslim Council of Britain, said that he intended to investigate. “Certainly we would find it very offensive to have eaten food with alcohol.”

And there must be no compromise with the demon alcohol:

Masood Khawaja, of the Halal Food Authority, said that this was not the first time the issue had been raised with Walkers.

“They should have looked into the matter and solved it instead of hiding behind labelling regulations. It does not matter what percentage of alcohol is involved.

This is all a load of halal hooey, because even sharia experts among Muslims have ruled that trace amounts of alcohol are permissible for good Muslims to ingest. According to a spokesman for Walkers:

“In previous assessments by Muslim scholars, foods and drinks that contain trace amounts of ethyl alcohol have been confirmed as permissible for Muslim consumption because of both the fact that the ingredient does not bear its original qualities and does not change the taste, colour or smell of the product, and its very low level.”

It’s about who controls governance and commerce within the newest Islamic colonies in Europe.

It’s about who’s boss. The British government have repeatedly shown that they are most emphatically not the boss, and the Archdhimmi of Canterbury agrees with them.

Islam is the boss. Carrie Nation of the Muslims is in the pub with her hatchet, and the old boss is cowering behind the bar, hoping that none of the glass splinters will ruin his coiffure.

20 thoughts on “Carrie Nation Among the Muslims”