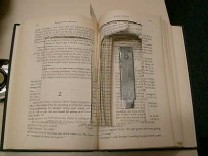 Tampa International Airport intercepted a box cutter when it x-rayed a passenger’s backpack. The metal shaft was obvious and the trip was over for Benjamin Baines:

If convicted, Baines faces up to 10 years in prison and up to a $250,000 fine for a federal charge of attempting to board an airplane with a concealed dangerous weapon. He is currently serving a 30 day sentence after pleading guilty Monday to a state misdemeanor charge of carrying a concealed weapon.

About 7:30 a.m. Sunday, airport security ran Benjamin Baines Jr.’s backpack through an X-ray machine and saw the image of a box cutter, according to a report from the Transportation Security Administration.

When searching the backpack, a security officer found a book titled “Fear Itself.” The book was hollowed out, and the box cutter was inside.

After Baines was read his rights, he said his cousin had cut away the pages to make the hollow section in the book. Later, reports state, he said he had hollowed it out himself to hide money and marijuana from his roommates.

Baines told officers he was moving to Las Vegas and forgot the cutter was in the book.

Officers found books in the backpack titled “Muhammad in the Bible,” “The Prophet’s Prayer” and “The Noble Qur’an.” He also had a copy of the Quran and the Bible.

Several sheets of paper in the backpack included rap lyrics that referred to police, narcotics, weapons and killing. Baines told officers he is a rapper who writes his own lyrics and that rap music writers need to “play the part,” the report states.

And prisoners need a rap sheet, too. Now Mr. Baines has one as he sits in the local jail on charges of carrying a concealed weapon. When he gets out for that crime, federal marshals will be waiting for him:

It’s a long way from where he sits now to any stage performances.