A second Danish cartoonist has been forced to live under police protection by the renewal of the Mohammed Cartoon Crisis. Our Danish correspondent Kepiblanc has translated an article about Franz Füchsel from Fyens Stiftstidende.

First, a note from the translator:

Franz Füchsel is one of the best known illustrators over here. He is funny and extremely productive in newspapers, magazines and books. 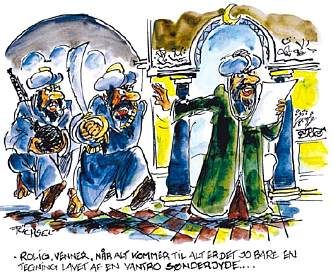 “Hang on, go back; after all it’s only a drawing made up by a South Jutland infidel.”


And now the article:

“I am not afraid, but worried,” says Franz Füchsel, a cartoonist who made one of the twelve Mohammed cartoons

The well-known cartoonist Franz Füchsel, living on the Danish island Fyn [Funen] has had his security detail re-established since last week, when PET foiled the murder plot against his colleague Kurt Westergaard. Franz Füchsel says to Fyens Stiftstidende that he is grateful for the police surveillance of his home.

“Once again some lunatics are on stage. They always will be. We cannot prevent it,” he says in his first major interview since the Mohammed crisis two years ago.

Last week Franz Füchsel took refuge in his summer cabin somewhere on the west coast in order to keep a low profile.

Does not regret his drawing

In spite of his children’s protest, he agreed to express his take on the whole affair.

“I’m not afraid, but worried,” says the cartoonist, who doesn’t regret his drawing — which later was sold and thus financed the rebuilding of a Turkish village destroyed by an earthquake.

Franz Füchsel speaks out because he thinks that “all this must settle down by now”.

He says he doesn’t fear for his life even if there’s a $50,000 bounty on his head in Pakistan.

Nevertheless this Motoon affair had consequences for him, such as being unable to travel in Muslim countries, e.g. Turkey.

“The culture we are up against has some nastiness and some people with a nasty way of treating their followers and others.

“But they better not come here with their nonsense,” says Franz Füchsel.

“As long as I live in Denmark, I will do exactly as I like within the law.”

“It’s wearing them down. Productivity goes down and errors go up, because the subconscious is on alert.

“One can compare the situation to someone in a traffic accident who is afraid to drive again, only times 10 or 100 time when it comes to these cartoonists.”

According to Tue Toft it is important for the cartoonists’ well-being to find oases where they can relax, and to find some level of security they can live with.

6 thoughts on “Another Danish Cartoonist Goes to Ground”