Up there… Where white is black and black is white, I won.

The celebration of oxymora is central to the politico-linguistic discipline commonly known as “political correctness”.

To disable rational opposition to the prevailing orthodoxy, the first step is to take control of the language, forbidding certain words, promoting others, and changing the meanings of words within the permissible vocabulary to align with an all-pervading political ideology.

The second step is to erode the logical framework of thought itself, eating away at the deep structure of language until the underlying mental processes are deranged, leaving the mind vulnerable to re-programming.

Under the new PC template, time-hallowed distinctions — between good and evil, moral and immoral, true and false — are discarded. The only remaining distinction allowed is between what is and is not politically acceptable. PC has but a single commandment: “Thou shalt have no other words before mine.”

If all this sounds vaguely Orwellian, it’s because George Orwell’s writings drew on his experience with communism, and modern politically correct orthodoxy derives from Marx, the Frankfurt School, and the ideology of the revolutionary Left.

The preparatory task in the Marxist/Frankfurt schema was to make the “long march through the institutions”, destroying the cultural fabric of Western Civilization, leaving it ready for re-branding with what is now known as political correctness.

Since the PC system sees the whole of reality through the lenses of politics, the only rules are political ones. It considers such notions as objective truth and moral value to be meaningless as well as oppressive, and seeks to replace them with political values. The new rules, of course, since they are subject to the whims of those who wield power, are fungible.

In the comments here a few days ago, Pangloss said this: 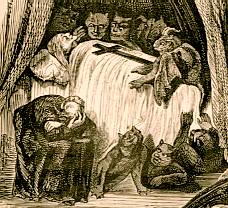 PC may not be Satan but it most certainly is a parody of Christianity. Christians have faith that God and Christ exist. Our science sprang from the Christian doctrine that God created the universe with eternal laws that are not subject to change. Discovering and using these laws is akin to worship of the Creator. Thus fact and truth are central to morality within Christianity.

On the other hand, PC has faith that what is politically allowable is good, what is politically disallowable is evil, and that truth and falsehood are irrelevant. It subordinates truth and falsehood to political considerations, and is thus much more fundamentalistic in its mindset than even fundamentalist Christianity, for no sane, fundamentalist Christian will claim that black is white and white black, or that women are every bit as strong as men because to say otherwise is sexist.

When someone asks the inevitable question of “how are these politically allowable and disallowable categories determined?” then obfuscation is the usual answer. The factual answer is that Stalin’s communist party internationale determined what was allowed and what was not. The practical answer is that anything that weakens liberty or strengthens communists and socialists (or feminists, greens, muslims, etc) is allowed and anything that benefits the USA or liberty or weakens communism, socialism, etc is not. Correctly identifying communism, socialism, or other isms as wrong and false religions counts as weakening them.

Since truth and falsehood are not part of the value system it is impossible to disprove PC under the PC system. It’s also impossible to prove it. That’s where the perverted faith of PC comes into play.

For practical purposes, what is true and what is allowable are defined by those who inhabit the existing power structure in the modern bureaucratic State, as well as its affiliated institutions in the media and the academy. The relativity of truth leaves them free to define what is to be affirmed and what is to be persecuted.

By adding massive amounts of bureaucratic regulation to the structure of society, the PC regime effectively ends the rule of law. When laws proliferate as they have in recent decades, virtually everyone is a lawbreaker. Enforcement becomes capricious, allowing the State to exert legal pressure against those elements which are most threatening to its hegemony.

After a while, everyone learns the unwritten and unofficial rules, and tiptoes in fear around the danger zones. Anything that violates the PC code of the moment is pushed underground and becomes samizdat, or disappears altogether.

Britain is an example of the modern PC regime in its full baroque exfoliation, and Lionheart’s case is emblematic of what happens to those unfortunates who transgress the boundaries of PC. The rules against racism and religious incitement are not applied equally to all races or all religions — witness what happened to the complainant against the behavior of Muslims on the London Underground.

Selective enforcement of the rules means that there are no rules.

George MacDonald Fraser, the creator of the popular “Flashman” novels, weighed in last weekend on British political correctness in an editorial entitled “How Britain has destroyed itself”:
– – – – – – – – –

Political correctness is about denial, usually in the weasel circumlocutory jargon which distorts and evades and seldom stands up to honest analysis.

It comes in many guises, some of them so effective that the PC can be difficult to detect. The silly euphemisms, apparently harmless, but forever dripping to wear away common sense — the naïveté of the phrase “a caring force for the future” on Remembrance poppy trays, which suggests that the army is some kind of peace corps, when in fact its true function is killing.

The continual attempt to soften and sanitise the harsh realities of life in the name of liberalism, in an effort to suppress truths unwelcome to the PC mind; the social engineering which plays down Christianity, demanding equal status for alien religions.

The selective distortions of history, so beloved by New Labour, denigrating Britain’s past with such propaganda as hopelessly unbalanced accounts of the slave trade, laying all the blame on the white races, but carefully censoring the truth that not a slave could have come out of Africa without the active assistance of black slavers, and that the trade was only finally suppressed by the Royal Navy virtually single-handed.

In schools, the waging of war against examinations as “elitist” exercises which will undermine the confidence of those who fail — what an intelligent way to prepare children for real life in which competition and failure are inevitable, since both are what life, if not liberal lunacy, is about.

That PC should have become acceptable in Britain is a glaring symptom of the country’s decline.

No generation has seen their country so altered, so turned upside down, as children like me born in the 20 years between the two world wars. In our adult lives Britain’s entire national spirit, its philosophy, values and standards, have changed beyond belief.

Probably no country on earth has experienced such a revolution in thought and outlook and behaviour in so short a space.

Other lands have known what seem to be greater upheavals, the result of wars and revolutions, but these do not compare with the experience of a country which passed in less than a lifetime from being the mightiest empire in history, governing a quarter of mankind, to being a feeble little offshore island whose so-called leaders have lost the will and the courage, indeed the ability, to govern at all.

But much has deteriorated. The United Kingdom has begun to look more like a Third World country, shabby, littered, ugly, run down, without purpose or direction, misruled by a typical Third World government, corrupt, incompetent and undemocratic.

My generation has seen the decay of ordinary morality, standards of decency, sportsmanship, politeness, respect for the law, family values, politics and education and religion, the very character of the British.

Oh how Blimpish this must sound to modern ears, how out of date, how blind to “the need for change and the novelty of a new age”. But don’t worry about me. It’s the present generation with their permissive society, their anything-goes philosophy, and their generally laid-back, inyerface attitude I feel sorry for.

They regard themselves as a completely liberated society when in fact they are less free than any generation since the Middle Ages.

Indeed, there may never have been such an enslaved generation, in thrall to hang-ups, taboos, restrictions and oppressions unknown to their ancestors (to say nothing of being neck-deep in debt, thanks to a moneylender’s economy).

We were freer by far 50 years ago — yes, even with conscription, censorship, direction of labour, rationing, and shortages of everything that nowadays is regarded as essential to enjoyment.

We still had liberty beyond modern understanding because we had other freedoms, the really important ones, that are denied to the youth of today.

We could say what we liked; they can’t. We were not subject to the aggressive pressure of specialinterest minority groups; they are. We had no worries about race or sexual orientation; they have. We could, and did, differ from fashionable opinion with impunity, and would have laughed PC to scorn, had our society been weak and stupid enough to let it exist.

Short of assassination there is little people can do when their political masters have forgotten the true meaning of the democracy of which they are forever prating, are determined to have their own way at all costs and hold public opinion in contempt.

I feel I speak not just for myself but for the huge majority of my generation who think as I do but whose voices are so often lost in the clamour.

We are yesterday’s people, the over-the-hill gang. (Yes, the old people — not the senior citizens or the time-challenged, but the old people.) Those of ultra-liberal views may take consolation from this — that my kind won’t be around much longer, and then they can get on with wrecking civilisation in peace.

Short of assassination there is little people can do when their political masters have forgotten the true meaning of the democracy of which they are forever prating.

This, as we all know, is “hate speech”. A man of lesser eminence than Mr. Fraser might have encountered the Crown Prosecutor for putting such forbidden thoughts into writing. A year from now, when the Lisbon Treaty goes into full effect, even his celebrity status might not spare the author from official retribution.

The PC project has been notably successful in its long march through our public institutions. Once our culture has been fully eviscerated, with all the vital guts removed, the emptied body politic will be ready to be filled with whatever the revolutionary vanguard deems most appropriate.

And for Islam it will be the Man of Perfect Submission.

The forces of Islam are more vital, more fecund, and more ruthless than any of the children of the Frankfurt School. When the time comes to refill our empty culture, political correctness won’t stand a chance.