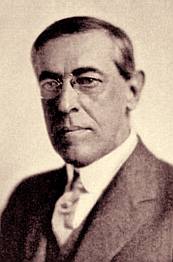 For those of us who are attempting to unlearn the decades-long indoctrination that is now known as “political correctness”, an essential part of the process is dethroning the icons of modern liberalism. From an American viewpoint this has meant looking at JFK and FDR with a jaundiced eye, but we also need to go even further back, all the way to Thomas Woodrow Wilson.

Woodrow Wilson is the only scion of the Commonwealth of Virginia whose election to the presidency I would rather forget. Wilson did much mischief in his conduct of American foreign policy, and we have yet to shake off his legacy. From Versailles to the UN to the idealism of George W. Bush: we set out to make the world safe for democracy, and ended up making it unsafe for just about everyone.

What is rarely recognized is how much Wilson had in common with Mussolini, Hitler, Stalin, and all the other murderous socialist dictators of the 20th century. Like them, he believed that humankind could be reshaped by the idealistic vision of the privileged few who governed them. Like them, he was loath to allow the reality of human nature to stand in the way of his vision.

Shaking off Wilsonianism is a worthwhile goal. In the comments to last night’s post, Conservative Swede had some interesting things to say on this topic in response to a comment by Zenster. In consultation with me, he presents this revised version:

The forms of government we had in Europe before the drastic change into a Wilsonian world order — and American style modern democracy — were mixed systems. The systems mixed monarchic, oligarchic and democratic elements, and during the 19th century the democratic element carried substantial weight within them. All wise political thinkers before WWI spoke in favour of a mixed constitution, such as Burke, Machiavelli or Aristotle (with his Politeia). Also the Founding Fathers of America — who explicitly stated that they wanted to avoid democracy in their constitution — referred in their constitution to a republic.

Spogbolt wrote an interesting post about Burke’s view of a mixed constitution and the democratic component of it.

But, for simplicity, let’s just speak of Monarchy vs. Democracy, for the sake of the argument. LN just sent me an email with this good quote by our Homophobic Horse:

Socialists are also opposed to the nation state because it suggests that people have a territory to be ruled as they see fit. In a socialist society no one is permitted territory, it allows people to create and examine their own thoughts, which is something that cannot be controlled.

When things are privately owned they are taken care of and they thrive. When ownership is unclear, undefined, or public, things fall apart.

Monarchy means that there is an owner of the country. In democracy there are only caretakers, who will be gone after a while and won’t have to face the consequences of their actions. I recommend reading Hans-Herman Hoppe who presents this argument very well. Here’s the introduction to his book Democracy: The God That Failed. Using the core argument in favour of capitalism — that private ownership is the best solution — he argues that monarchy is superior to democracy. However, Hoppe is a paleo-libertarian, and later on degenerates into advocating an anarcho-capitalist system. But his argument regarding Monarchy vs. Democracy is nevertheless well presented.

The reason we have mass democracy today is that America is ruling our civilization. The change from mixed constitutions to pure democracy happened virtually overnight in Europe by the end of WWI (read about it in the Hoppe link above). To Americans, democracy appears to be self-evident. They got their political system for free from the Brits (who built their institutions in so many places around the world).

The election law of 1430 was applied in America just as in Britain, with the same land-ownership requirement. However, compare the tiny island of Britain with the vast landscapes of America. In practice every grown man in America could get enough land to earn the right to vote, so therefore universal suffrage came to be seen as the natural and self-evident thing among Americans.

Since then this concept of American democracy has been spread around the world. Now our civilization is falling apart, because there are only “caretakers”, but nobody really taking care of things, nobody really caring. No one responsible. Democracy is socialism applied to the highest level: the form of government.

Apart from the egalitarian and revolutionary identity, America has the identity of former colony in its backbone. And this is the main reason why America has never been able to operate properly as an empire. It has an underdog mentality, in which other countries can never be invaded and taken over (as the Brits did); it’s only allowed to “liberate” people — this is the model of thinking.

Niall Ferguson pointed this out regarding the Mexican problem. If the Americans had been the British Empire, they would have invaded and taken over a long time ago. But Americans just can’t do that. It’s a mental blockage as strong as the one the main character in Clockwork Orange got via his therapy by the end of the movie, which rendered him incapable even of the necessary action for self-defense. It’s like a chip in the brain saying: “Error! Illegal operation!” “Invading and taking over other country impossible. We former colony. Must only liberate.”

America is maintaining it, but could never have created it in the first place. The actions needed to create such an order would trigger the chip in the brain of Americans and generate “Error! Illegal operation!” And this is where the fundamental problem is, because you won’t be able to maintain it in the long run, without the ability to re-create it.

So I’m kind of torn here. On one hand I support America in its maintenance of this order, and fully see how it’s ultimately defended by military means. And that peaceful trading, etc., is far from self-evident. But on the other hand, I regret that it’s America in this position, since it’s not in its nature to be able to uphold it in the long run.

Our best hope is that the revolutionary spirit, which is fundamental among Americans, can be turned against Wilsonian America itself (and some good old settlers’ mentality on top of that). A deep understanding and acceptance of the historical differences between Europe and America, from both sides, will be necessary, if we are going to solve this. Americans, as well as Europeans, will need to reach far back in history (before WWI and further) to find the proper inspiration to face up to this threat. And the further we go back in history, the more we find a common identity.

31 thoughts on “Shaking Off Woodrow Wilson”