Here’s yet more evidence of how anomalous Denmark is. The was printed on the cover of a Danish magazine over the weekend, and seems to be an illustration for an article about Jihad Rap: 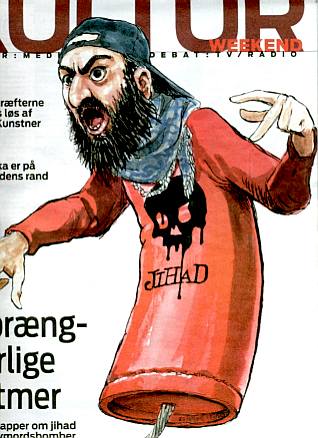 Thanks to Henrik of Europe News for scanning and sending the image.

The magazine in question is the ‘Culture’ section of Jyllands-Posten (editor: Flemming Rose — surprise :), and the headline reads:

(BTW, I prefer the term “single-use activist” over “suicide bomber”. But that’s another story 🙂

The article itself runs over 4 full pages and seems not to be posted online. Some core items and names:

YouTube holds videos from all of these. Links are given in the article, but they’re tricky to type in and get right.

I take issue with your statement that Denmark is anomalous. We just happen to be a bit behind, retaining some normality in a world that is going nuts. We would like the rest of the world to return to normality. That’d be nice.

The only form of praise we want is imitation.

11 thoughts on “Rappin’ the Jihad”