The latest This oldie-but-still-insane* political correctness fairy tale from the Unhinged Kingdom: 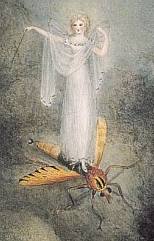 A family doctor has been summoned to a formal hearing over his refusal to put a 34-year-old male patient on the list for screening for cervical cancer.

The complaint has caused doctors in the west country practice to spend hours in meetings and writing replies to the local primary care trust over the complaint which began two years ago.

The man, who has fathered a child, believes he is a hermaphrodite although his doctors have examined him and can find no evidence for this. However, they did agree to his request to be re-registered with a female name.

One doctor in the practice said: “We are worried that the PCT is so falling over backwards to be patient-friendly, that it has gone too far the other way. Silly things are starting to happen.”

The wife of one of the GPs, told The Telegraph she had every sympathy for people who believe they had the body of the wrong gender but the decision to investigate the refusal was political correctness taken to extremes.

She said her husband, who has been a GP for 30 years and who trains young doctors would be “pleased to hear from anyone, medical or otherwise, who could teach him the correct way to carry out a cervical smear on a 34-year-old male”…

The mind reels whilst conjuring up such an image. But the bureaucracy doesn’t flinch.

*Archonix pointed out the date on this one: 2003. How come it’s still so fresh?

She added: “The refusal of one of the doctors to put Mr X on the recall list for cervical screening has resulted in a complaint and, as a result the doctor, practice manager and other practitioners have spent many hours, at the expense of the care of other patients, answering written inquiries.

“My suggestion would be to accede unquestioningly to the patient’s demand and carry out the procedure requested. Provided of course that a representative of the primary care trust could indicate the necessary part of this gentleman’s anatomy, and was able to give the learned medics a clue as to how they could access it.”

The doctors are confident that the man has “a genuinely held belief” about his gender.

As Charlie Brown used to say, “it doesn’t matter what you believe as long as you’re sincere.” This man needs psychiatric services, not gynecology. But he’s still adamant:

He first wanted a cervical examination and was refused because he did not have a cervix. He then asked to be put on the list for regular screening.

He has since requested full DNA testing and full blood toxicology screening, although he will not give his doctor a reason or describe symptoms to justify the tests.

Is it any wonder that the National Health Service in the UK is in trouble? This demand moves beyond ludicrous into some Flaky Space best served by a long rest and cool cloths on the forehead…and, come to think of it, maybe some anti-psychotic meds.

10 thoughts on ““Neither Fish Nor Fowl Nor Good Red Herring””