Our Czech correspondent Lugundum offers another essay about the effects of mass immigration in the West.

Greed, Immigration, and the Economy of Poverty
by Lugundum 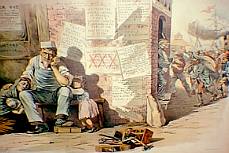 In my previous contribution I took on the issue of mass immigration and the economic reasons behind it. But some readers doubted my message and charged me with pandering to socialism. That accusation, however, bears some merit in the whole issue and, for what is it worth, let us take a closer look at it.

When asserting that the socialism charge is relevant to the immigration debate I am talking particularly about collectivist aspect of economically driven immigration. For politicians, entrepreneurs, and various CEOs we are no longer human beings but an anonymous collective, a mass. In our ailing societies all social constructs like family, local community, or nation have been marginalized and weakened by socialists and their various off-spring. What is left is a mass of consumers and producers. Dehumanized to this extent we could be (and in fact we are) an easy target for various social experiments like mass immigration and multiculturalism. Our mainstream media won’t warn us — in fact they are taking a part in this monstrous experiment.

The fate of such a society hammered by both immigration and outsourcing is described in an essay written by Martin Hutchinson and appropriately titled “Eroding Western living standards”:
– – – – – – – – –

Since the majority of location-dependent jobs in Western countries are low-skill it therefore follows that if governments wish to protect local living standards, they need to discourage low-skill immigration. Except in Japan, they have not been doing so; both in the EU and the United States low-skill immigration, frequently illegal immigration, has got completely out of control and is immiserating the working classes. The Economist and the Wall Street Journal calling for looser immigration laws are like Reform Bill-era Whig grandees calling for the workhouse; their urgings are theoretically driven by aristocratic concern for the poor, but in practice betray a complete lack of understanding of what the poor actually want and need.

From the summary above, it is pretty clear that income levels in the West are converging with those in the more competently run emerging markets. The bad news is that in the years ahead this is likely to happen through an absolute decline in Western living standards. The populations of India and China greatly exceed those of all the rich countries put together. Further, as discussed above, the greater part of Western economies is vulnerable to low-wage competition. Thus the economic histories of a high proportion of the Western population under 30, except the very highly skilled, will involve repeated bouts of unemployment, with job changes involving not a move to higher living standards but an angry acceptance of lower ones. By 2030, it is possible that the median real income in the United States and Western Europe may be no more than 50-60% of its level today.

I would add to Martin Hutchinson’s observation that not only blue-collar workers will be affected by wage depression, but even large numbers of white-collar people. No shiny outlook for the middle class. For example, I have tried google and got the following links.

Apparently, the outsourcing and hiring of immigrants from India, China and Eastern Europe has already pressured salaries in the field so far downwards, and the competition that caused the stress is so high, that local people are hesitant to send their children to study information technologies. Immigration yields the need for more immigration.

Here I’m supposing that the quoted source is correct and the numbers haven’t been created out of thin air in order to press for the import of more cheap labour, which is also possible. Many of these open positions created in Western countries are directly designed for a cheap foreign workers, and local people need not apply. I urge you to see this US video documenting how NOT to find a local worker and get them from abroad.

Just one quote from the video:

“Our goal is, clearly, to not find a qualified and interested US worker” — Larry Lebowitz, immigration lawyer

Even more outrageous is this link concerning the UK:

“UK immigration restrictions may be lifted for 2012 Olympics preparation”

The London Olympic games are cited as a reason to bring in even more immigrants. Please note that “unskilled workers” are demanded. Apparently decision-makers aren’t worried about the impact of their mismanagement: the UK is facing an unprecedented increase in poverty due to immigration.

Immigration has also caused many young Britons to be thrown out of the job market.

Where all that will lead us we can see on the example of contemporary California. Once a part of the Western world, it has ended up as an extension of Mexico, with an apocalyptic fiscal deficit of more than 14 billion dollars, rampaging criminality, and Latino gangs waging a race war against the remaining black population of Los Angeles.

There will be no miraculous cure for this situation and the economy of this state will degenerate to the status of a Latin American country with all its attributes. Needless to say, the young Mexican/Latino population will neither be in position to produce the economic output necessary to take a care of elderly American people, nor will they want to do that. Old people without their own children who could care for them will be facing a bitter end to their life.

Indeed, the biggest problem of people struggling against immigration, Islamization and the consequent demise of our civilization is that they are paying attention to bigots from the left whilst the economically driven motor of contemporary mass immigration remains unaddressed, to our own peril.

Fortunately, we could still change the course of the future, but we must accept the fact that our enemy is not only lefty liberal politicians but also the unscrupulous entrepreneur who has managed to corrupt our society.

The majority of immigration is economically driven now. Without accepting this reality we will remain one-eyed in our struggle for our rights and dignity and consequently we will lose our fight.

So returning to the charge of socialism: at the end of the day we will land in socialistic poverty as a mass of people without culture, identity, or rights. The consequence of the neo-liberal free ride is the socialist cesspool.

It is time to see through the brick wall to the naked king.

9 thoughts on “Greed, Immigration, and the Economy of Poverty”