I sure missed this story while it was going on. Thanks to Chalons for bringing it to our attention in the comments on “Guns, Babes and Denmark”. 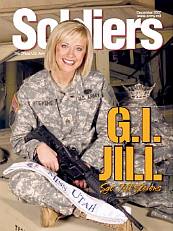 Miss Utah is competing in the Miss America contest (can’t remember the last time I saw one of those programs…maybe 1979, before the TV went to the dump and Bert Parks was still among us?).

Chalons directed us to Jim at Gateway Pundit, who has a number of posts on this young woman, G.I. Jill Stevens. She’s a for-real soldier who spent six years with the Utah National Guard ane was deployed with them in Afghanistan. Now she will compete in the pageant/contest 2008. While serving in Afghanistan, she was awarded the Combat Medical Badge for her work. The requirements are listed here:

The CMB was created as a “companion” badge to the CIB [Combat Infantry Badge] with criteria for its award intended to parallel that of the CIB. It was designed to provide recognition to the field medic who accompanies the infantryman into battle and shares with him the experiences unique to the infantry in combat….

Jim says there is something we can do to help her make it to #1 in the coming pageant:
– – – – – – – – –
Vote for her. This notion of having a popular vote is evidently a new part of the Miss America Contest, and the internet makes it easy. This link takes you to the voting page, which has a rolly bar that features the name of the state you’re on.

NB: the voting page doesn’t seem to operate if you have a pop-up blocker in place. I had to click mine off to vote. And you can vote once a day, though time is short: only till the 26th.

For our European readers (and geographically-challenged Americans), the state of Utah is located on the US map image right at the southern-most star. You can vote once a day.

It would be very cool if the internet got a surge going for a real heroine. She’s gotten her nursing degree and plans to return to the Army as a commissioned officer.

While you’re over there read this post of Jim’s. A few sour grapes in attendance. Among the left a cramped and sour soul afflicted by a lack of generosity seems to be a prerequisite.