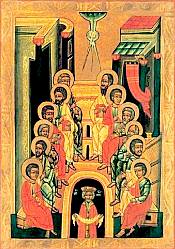 In Christian theology, there is a term, “baptism by fire,” which is used to represent either the picture of Christ’s disciples at the feast of Pentecost or, secondarily, referred to one who is martyred by being burned at the stake. Joan of Arc is one example, though there are many others in both the Eastern and Western parts of the Christian Church.

Very early on in Christian tradition, icons illustrated the disciples with tongues of fire above their heads, the flames symbolizing the Descent of the Holy Spirit. It became a major feast in the Church,and Hagia Sophia Cathedral in Constantinople (now Instanbul), originally built in the 6th century, came to signify its foundation. Initially, Pentecost (like other Christian feast days) was drawn from the Jewish feast of Shavuot, though the latter was a minor harvest feast celebrated in commemoration of the origins of the Torah, but within the Christian tradition was considered a major feast:

Shavuot is the second of the three major festivals (Passover being the first and Sukkot the third) and occurs exactly fifty days after the second day of Passover. This holiday marks the anniversary of the day when we [the Jewish people wandering in the desert after escaping from Egypt] received the Torah at Mount Sinai.

Back when Europe was Christian, Pentecost was known as Whitsunday and the following day was a public holiday, “Whitsuntide Monday.” Only recently has that ancient holy day been replaced with another name or simply removed from the calendar all together:

The following Monday is a holiday in much of Europe. The day is known as Whit Monday in England, Wales, and Ireland, and is also celebrated in Iceland, Norway, Denmark, The Netherlands, Poland, Belgium, parts of Switzerland, Germany, Austria and Hungary. Since 1967, however, Whit Monday has not been a public holiday in the United Kingdom; the holiday has been moved to the fixed date of the last Monday in May, which sometimes but by no means always coincides with Whit Monday. Whit Monday also ceased to be a statutory holiday in France in 2005, where the abolishment led to strong protests. Also in Sweden Whit Monday is no longer a holiday and June 6 (Swedish National Day) has become a day off.

However, I doubt the poor woman in this news story planned on “celebrating” her reception into the church by being burned over seventy per cent of her body. From Compass Direct News:
– – – – – – – – –

DHAKA, Bangladesh, January 24 (Compass Direct News) – Unknown attackers tried to burn a 70-year-old woman to death on January 7 after learning that she would be baptized as a Christian next month. Rahima Beoa, who was planning to be baptized on February 13 in the Muslim-majority Rangpur district, suffered burns over 70 percent of her body. “The unknown people wanted to burn alive the elderly woman because they came to know that she would be a Christian in the next month,” said Khaled Mintu, regional district supervisor of the Isha-E-Jamat Bangladesh church. “It was a devilish conspiracy to stop her being a Christian.” Beoa is mother-in-law of Ashraful Islam, who along with his wife became a Christian two years ago. Close relatives and neighbors were said to be angry with the couple for their conversion from Islam.

Another case of “culture clash.”

4 thoughts on “Another Baptism by Fire”