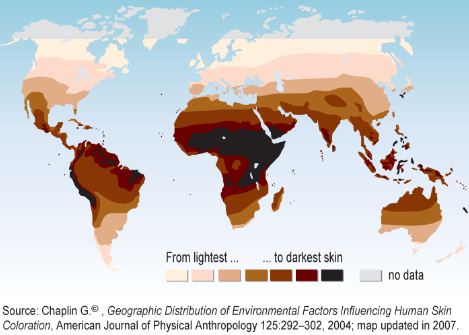 The twin role played by the skin – protection from excessive UV radiation and absorption of enough sunlight to trigger the production of vitamin D – means that people living in the lower latitudes, close to the Equator, with intense UV radiation, have developed darker skin to protect them from the damaging effects of UV radiation. In contrast, those living in the higher latitudes, closer to the Poles, have developed fair skin to maximize vitamin D production.

This map is put out by the UNEP/GRID-Arendal Maps and Graphics library.

Go here for more maps. Type your theme in the search window on the left sidebar. For example, there is an interesting one about where all the trash goes. No wonder that cat food from China isn’t safe.

Needless to say, maps from the UN are usually accompanied by dire warnings regarding the future. This one of skin color, however, is simply interesting information.

21 thoughts on “A Geography of Skin Color”