Alexis, a reader and commenter both here and at the Belmont Club, has composed a series of “Questions for Charles Johnson”. Below is the first group:

If Charles Johnson wishes to become recognized as the leader of any broad alliance of counter-jihad forces, he needs to answer the following question:

Should someone who makes an accusation be willing to be judged according to the same standards to which he judges others? 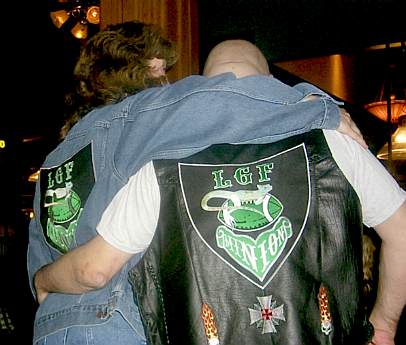 Please note the Iron Cross underneath the “LGF Minion” insignia. According to the Anti-Defamation League and the Knights Hospitaller, the Iron Cross is used as neo-Nazi insignia.

These photos were found at leftist web sites known to be hostile to Little Green Footballs.*

So, is Charles Johnson prepared to distance himself from men wearing the Iron Cross as part of their “LGF Minion” outfits, whomever they are? Are the lizards at Little Green Footballs prepared to denounce Nazis within their own midst?

I’m not holding my breath.

These are very good questions.

Remember last night, when I posted about Odin’s Cross, also known as a Celtic Cross? According to the Anti-Defamation League:

“No one should assume that a Celtic Cross, divorced from other trappings of extremism, automatically denotes use as a hate symbol.”

It’s important to remember that the ADL is a very, very liberal organization. And, despite being a bastion of politically correct Multiculturalism, it gives the Celtic Cross at least a partial pass.

So how does the same organization feel about the Iron Cross? Here’s the ADL’s database entry on that particular symbol:
– – – – – – – – –

Hmm… No exceptions allowed for the Iron Cross.

So, if we use the LGF Standard of Symbol Analysis, plus guilt by association, there’s only one possible conclusion to be drawn about Little Green Footballs:

One of the big problems with this whole stupid argument is the assumption that we know what any given symbol means in any particular photograph.

Someone finds photo of a Vlaams Belang member in which a Celtic Cross can be seen.

Someone finds photo of a lizardoid wearing an Iron Cross patch on his jacket.

Conclusion: He’s NOT a neo-Nazi.

How do we know that? Remember, according to the ADL, no other meaning can be ascribed to the Iron Cross except that it is a Nazi symbol.

Why, presumably, because the lizardoid tells us so.

OK, so we believe him.

But wait a minute…

Because we know he’s lying.

And how do we know?

We know because we’re the Guardians of PC Truth. We’re the Neighborhood Watch for Multicultiville.

We’re the Supermen of the Age of Aquarius who can look inside people with our special R-Ray glasses and see the SIN OF RACISM in the hearts of others.

That’s how we know that the lizardoid is not a neo-Nazi, and that Filip Dewinter is.

The point of all this rigmarole is this: Let’s apply the same standards to everyone.

If we do, we have two choices:

But then again, that may be way too commonsensical for a lot of people.

43 thoughts on “That Fascist Iron Cross”