Yesterday Dymphna reported on the plight of Palestinian Christians in Gaza, who face violent intimidation and death at the hands of Hamas.

Gaza is not the only part of the Islamic world where Christians are under siege: Coalition forces in Iraq have been unable to protect the country’s Christian minority from violent oppression. The latest example of the plight facing Iraq’s Christians comes from the Times Online:

On her first day at Basra University this year a man came up to Zeena, a 21-year-old Christian woman, and three other Christian girls and ordered them to cover their heads with a hijab, or Islamic headscarf.

“We didn’t listen to him, and thought he might just be some extremist student representing only himself,” she said. The next day Zeena and two of her friends returned to class with uncovered heads.

This time a man in the black clothes of the Shia militia stopped them at the entrance and took them aside. “He said, ‘We asked you yesterday to wear a hijab, so why are you and your friends not covering your hair?’. He was talking very aggressively and I was scared,” Zeena recalled.

The girls explained that they were Christians and that their faith did not call for headscarves. “He said: ‘Outside this university you are Christian and can do what you want; inside you are not. Next time I want to see you wearing a hijab or I swear to God the three of you will be killed immediately’,” Zeena recalled. Terrified, the girls ran home. They now wear the headscarf all the time.

In the past five months more than 40 women have been murdered and their bodies dumped in the street by militiamen, according to the Basra police chief. Major-General Abdul-Jalil Khalaf said that some of them had been killed alone, others gunned down with their children. One unveiled mother was murdered together with her children aged 6 and 11.

This persecution is occurring while the British army is nominally in charge of Basra. When the British formally hand control of the city back to the Iraqis later this month, the situation for the Christians in Basra will become even worse.

Christian women are not the only ones facing persecution. Like the Taliban, the Basra militias are enforcing their version of Islamic purity on other Muslims, but in this case it’s the Shiites who are imposing their rules on the local Sunnis:
– – – – – – – – –

At the university, Sunni students complain of being harassed by Shia militias. Ahmed, a 19-year-old Sunni freshman, was told that he had to grow a beard but keep his hair short to adhere to Islamic norms. He said that boys and girls who try to sit next to each other will be told to stay apart and given a lecture on Islamic virtue.

Self-appointed morality police, similar to the Bassiji who haunt students across the border in Iran, also grab people’s mobile phones and scroll through them looking for “immoral” video clips, music or pictures, Ahmed said.

Another student, Ali Yusuf, said that militiamen halted a freshers’ week party for new students, turning off the music system and ripping down the decorations. One armed thug picked up the DJ’s microphone and started praising Hojatoleslam Moqtada al-Sadr, the fanatical cleric who leads al-Mahdi Army, the most powerful Shia militia, before reading out a list of rules. 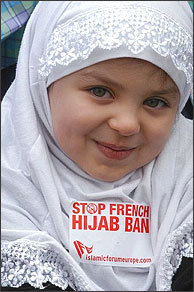 When allowed unfettered expression, Islam is not particularly tolerant. Celebrating diversity is not its forte.

Unless, of course, Muslims are in the minority. Then it’s time for mandatory diversity!

Remember the ban on headscarves in French schools? Or the legal fight in Britain on behalf of a girl who wanted to be allowed to wear the full hijab in school?

So when Islam is in the minority, women have the right to wear the veil.

When it is in the majority, women have no right not to wear the veil.

There’s a certain mathematical symmetry about these rules.

Which is not surprising since, as we are often told, mathematics was an Islamic invention.

9 thoughts on “Scurrying for Cover”