It’s coming down like snowflakes out there. Now all the cars will be reduced to driving a white-knuckled thirty miles an hour…and those are just the brave ones.

The future Baron set out for town – forty miles away. I figure if none of the other drivers panic (that’s best case scenario) he’ll be there in about an hour and a half. Or two. 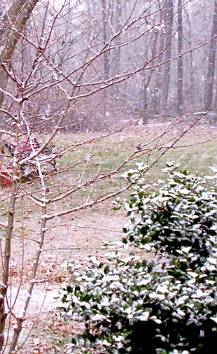 This was supposed to turn to rain, but it has stayed opaque since it started. The Baron looked at the outdoor thermometer this morning and it read 12ºF. When he put his thumb on it, the thing shot up to 43º but in reality it’s actually 29º according to the weatherman…obviously I need to get out our fancy digital thermometer we got as a Christmas gift. I can’t seem to get the battery in the outside piece to stay charged, though. And I’ll bet the directions are in the recipe box somewhere.

The weatherman claims there will be “little to no accumulation” but he’s a pathological liar. Nice guy, though; at least he smiles when he lies. Come to think of it, so do politicians…and economists bearing bad news.

Have you ever noticed how economists and NPR love bad news? They will chirp about bad news even if they have to twist the circumstances on the ground to squeeze a drop of doom out of what would otherwise be simply the ups and downs of life…or the success of the Surge. Thanks heavens for Bill Roggio and Michael Yon, not to mention Larry Kudlow’s on-going corrections of the MSM’s view on the economy.

MSM economic news=depression/deflation/doom/financial ruin coming soon to a home near you –probably yours. Be afraid. Larry Kudlow says “Twenty-Five Years of Prosperity (and more to come)”. See his link above.

As for our blizzard, I wonder if they’ve closed the schools yet? Or if the bus drivers are calling in sick again.

I guess this means Hurricane Season is over.