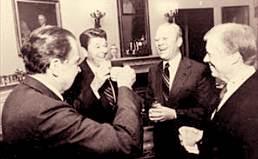 The above photo was recovered from an archive through the dedicated sleuthing of a Gates of Vienna operative. In it you can see (L to R) Richard Nixon, Ronald Reagan, Gerald Ford, and Jimmy Carter. You can also see that the four men are smiling, enjoying themselves, and even sharing a toast.

Mr. Carter is associated here with the racist Ronald Reagan, and — even more significantly — with the paleo-Nazi Richard Nixon, the Lord of the Underworld, the Prince of Darkness, SATAN HIMSELF!

I have no definitive information about what Jimmy Carter was doing there with those other men, but his presence in the photo certainly raises questions which need to be answered. Otherwise, Mr. Carter risks damaging the Democrat Party and the entire trans-national progressive movement.

I don’t know about you, but I’m going to be leery in the future of supporting Cynthia McKinney, Michael Moore, Hugo Chavez, and even Fidel Castro. All of these people would be well advised to disavow any association with such a questionable figure.

The ongoing hostility towards the Center for Vigilant Freedom was renewed last night in another Little Green Footballs post, this one directing its fire at the country report on Belgium given at Counterjihad Brussels 2007 by Filip Dewinter of Vlaams Belang.

The report itself was a concise and useful summary of the grave crisis that Belgium faces from a massive influx of unassimilated Muslim immigrants. An excerpt:

In Brussels more than one fifth of the municipal councillors are now immigrants of non-European origin. Most of them are Muslims, and most of them have been elected as Socialists, though many have also been welcomed as Christian-Democrat trade unionists on the lists of the Christian-Democrat Party.

But, if one believes the accusations hurled at Mr. Dewinter, the taint of his associations invalidates his message and precludes us from paying attention to it.

The LGF post went on to recycle the same old accusations against Dewinter, including the ludicrous funeral photo, in which Mr. Dewinter attended a funeral which Jean-Marie Le Pen also attended.

Which reminds me — I remember seeing Jimmy Carter standing next to George H. W. Bush at Richard Nixon’s funeral!

A reader tipped me to the LGF post, so this morning, for the first time in weeks, I actually read an LGF comment thread. I noticed at least three commenters in open rebellion against the lizardoid party line, with the leader very much in evidence commenting against them and throwing contemptuous insults in their direction.

It reminded me of a group of hobbits holding fast in defiance against the Nazgûl.

Concerning the issue of Vlaams Belang, the three commenters — Jeppo, Blogagog, and EtNorskTroll — said it better than I can, so I will simply quote excerpts below:

You have to remember that Dewinter was just one delegate among the 80 or so from more than a dozen European countries plus the US, Canada and Israel at the Counterjihad Summit. Just to list some of the anti-jihadist worthies in attendance: Bat Ye’or, Spencer, Bostom, Eldad, Littman, Sookhdeo, Fjordman, Ekeroth, Geller, Bodissey, Kepiblanc, Conservative Swede, etc. This conference was also supported by mainstream US conservatives like Diana West and Richard Miniter. This was not in any way, shape or form a fascist-friendly event.

…LGF should be one of the worldwide leaders of this movement, not self-marginalized because of disagreements with only one of its members.

This split has left LGF and few others on one side, and virtually the entire anti-jihadist movement on the other. The VB and SD along with several other similar European political parties will continue to grow as Europe continues to Islamize. Most conservatives recognize this and welcome it. The ones who don’t will gradually become irrelevant. The Vlaams Belang are your allies whether you like it or not.

It’s not about you or me supporting the VB, it’s about the 800,000 (and growing fast) Flemings who do. It is them, not us, who are pro actively standing up against the Islamic immigration invasion of their country. This is why they are applauded by serious anti-jihadists everywhere. Hopefully one day soon the artificial and corrupt nation of Belgium will split up, and an independent Flanders will have a VB government that will stop Muslim immigration once and for all. Maybe you will disapprove of this. I won’t.

I’m not a white nationalist, and I support Israel pretty much as strongly as I support America (well, close). But you are really misrepresenting potential allies against islamofascism, and I think I’ve seen enough.

LGF, once a uniting force of all who support an end to islamic supremacism, jihadism, and terrorism, is developing a 1984 attitude. Frankly, I’m creeped out.

You will no doubt ban me for saying this (I’ve seen examples of bannings for lesser slights) but STOP DIVIDING THE GOOD GUYS! Is it wrong to be a fan of the Democrats since Robert Byrd was in the KKK? Of course not. He grew, and got over that. It IS wrong to support the Democrats, but for entirely different reasons.

So why is it wrong to support VB if some of its members were scumbags in the past? EVERY political movement has scumbags in its past. As an American, I support the Flemish as much as I support the Israelis. Danes, Swedes, likewise.

I was trying to stick up for sense and reason. This schism benefits no one except the Jihadis….and that angers me to no end.

Even as there is no racially pure group, there is also no politically pure group, ‘multi culturally thinking’ or otherwise. Life is all about compromise. Adults know this. It is only children who are allowed the luxury of indulging in absolutes.

Charles Johnson has made an encouraging gesture by allowing these comments to remain on the thread and by not banning the commenters. His magnanimity gives me hope that the current unpleasantness is in the process of winding down.

47 thoughts on “When Black Friday Comes”