This is the latest essay from the British author Paul Weston, whom I had the pleasure to meet and toast last month in Brussels. 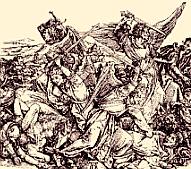 When Francis Fukuyama wrote The End of History and the Last Man in 1993, it was to argue that Western liberal democracy and free market economics meant an end to warfare within the west, and by default, the end of history.

Fukuyama was drawing on Winston Churchill, who stated: “The history of man is war”, thus allowing Fukuyama to propose that a future consisting of perpetual peace meant an end to history itself, history being simply a narrative of warfare, conquest and re-conquest, rather than which queen succeeded which king and on which date.

This idea that warfare within the West is now a thing of the past seems to be shared by an overwhelming section of Western people, reared as they are on a diet of enlightened tolerance and historical ignorance.

In 1990 it would have been relatively difficult to argue with Fukuyama’s prophecy. The West, excluding the inevitable frictions that came with the break up of the Soviet Union, was clearly not going to engage in the type of politics that led to the two world wars, whilst the demise of Communism meant an end to the global proxy wars between Russia and America.

What Fukuyama failed to realise, however, was that the ingredient for yet another “war to end all wars” was already in place. The cultural clashes between fascism, communism and liberal democracies had simply been replaced with another culture that would inevitably clash with the Western host cultures — Islam.

Wars do not simply spring out of nowhere. Although the causes may be relatively complicated, they require only a few very basic ingredients which when blended together, placed in a pressure cooker on gas level 5, and left to boil unattended, can have only one result.

The first of these, self evidently, is an enemy, without which a chef cannot even begin to prepare his feast gastronomique. Some may argue that Islam is not our enemy; such an entity being radical Islam, a relatively small component of Islam overall. Possibly so, but this rather misses the point that Western liberal democracy is Islam’s enemy, as they tell us over and over again, through word and deed.

The death and destruction wrought throughout the West in recent years is not because Islam, in some childlike, well-intentioned yet misguided way, wishes to assimilate with us, it is because Islam wishes to take us over. We, obviously, do not wish to be taken over, so we must be prepared to resist an enemy, or be prepared to submit to an enemy, the point being that there is, with absolute certainty, an enemy.
– – – – – – – – –
The fact that it is radical Islam as opposed to moderate Islam is immaterial. In WWII Germany was our enemy, not the Nazis, just as Islam is our enemy today and not radical Islam. I am sorry to have to say this, but war entails polarisation of differing races/religions; the pieties of multiculturalism are reserved only for times of peace.

The second ingredient for war is anger and resentment amongst a unified mass majority. Despite the breadth of difference between Christian, post-Christian, Jew, agnostic, atheist, male, female, homosexual and heterosexual, the common thread that unites the people of the liberal West is no longer what we are, but what we are not. We are not Islamic, and — voluntarily — never will be.

And we are getting angrier by the day as we watch the television news, read the newspapers and listen to Islamic rhetoric calling for the overthrow of the West; a call apparently supported by our ruling elites who choose to clamp down on their indigenous people who dare to complain, rather than the perpetrators themselves.

Despite the best efforts of the vast state-funded race relations industry, the glaring evidence suggests one stark, unpalatable fact; Islam and the liberal West are incompatible. The utopian multiculturalist view that we can all get along is belied by the fact that as Islam keeps on trying to blow us up, so “Islamophobia” continues, quite naturally, to grow.

When police chiefs speak of “heightened racial tensions” (and in the case of France “low-level civil war”) they speak volumes about our current predicament. When Islam moves into an area and the indigenous inhabitants move out, this too speaks volumes. We do not — indeed apparently cannot — co-exist, a parlous state of affairs even whilst Westerners have the means and the territory to move away, but what happens when that escape route is removed?

Unfortunately, the birth rate differentials coupled with massive Muslim immigration and growing indigenous emigration suggest that this escape route is only temporary. Many European cities are on the brink of Muslim majorities already; within the next twenty years this will only escalate with increasing rapidity. At some point in the not too distant future, Europeans will have nowhere left to run.

Just as Islam is intransigently opposed to Western liberal democracy, so Western liberal democracy is intransigently opposed to Islam. The West in the case of “within borders” religious conflict is a demographic juggernaut compared to Islam today, but this can change very quickly as I argued in part 1 of a recent article. Within twenty years we will see two juggernauts of equal size, travelling in opposite directions on the same side of the road with the all too obvious result: collision circa 2025 or earlier, depending on their speed.

And it is as simple as that. Western Europe in 1990 did not have the ingredients necessary to bring about another war, but in 2007 we have the only ingredients necessary to ensure it. Two intransigent enemies, one demographically shrinking, the other demographically — and literally — exploding, both sides drawing their lines in the sand, and of course the simmering anger, fear and resentment that comes with such a scenario.

This situation reminds me of A E Housman’s words, describing the year 1914:

Europe is a powder keg. The Germans are gripped by fervent nationalism, the British feel afraid of German expansion….the French still remember the bitter defeat of 1870. Germany enters into a pact with the Austro-Hungarian Empire, but that empire is being torn apart by ethnic tensions and it will take just one spark to ignite a European war on an unimaginable scale…

Plus ça change plus c’est la meme chose, as they once said over a game of chess and chain-lit gauloises in the avant garde cafes of the Paris banlieus. History repeats itself, a fact not lost on the realists of the “right”, but lost in the fluffy mists of time to the liberal/left.

Perhaps a more recent quote might jolt them from their multicultural reverie, taken from Alastair Finlan’s book The Collapse of Yugoslavia 1991-1999 which details the civil war that killed 250,000 people, the majority of whom were civilians, out of a population of 10 million.

In 1991, almost overnight, an ethnically diverse region that had enjoyed decades of peaceful coexistence descended into bitter hatred and chaos. Communities fractured along lines of ethnic and religious affiliation and the resulting fighting was deeply personal, resulting in brutality, rape, torture, genocide and ethnic cleansing.

Yugoslavia was a small country, and the death toll would have been much higher were in not for the intervention of external forces. Continental Europe has close to half a billion inhabitants. Should war start, there is no way on earth that any external force can stop it. And it need not be constrained to Europe; would a nuclear-armed Pakistan sit idly by? Will Iran or Syria possess a nuclear capability and would they use it against Israel? Would America then become involved? Would our need for oil necessitate the invasion of the Middle East? How would Turkey respond to that?

Unlike the First World War, given our nuclear weapons, this really could be the war to end to all wars.

Such an apocalyptic scenario should give the liberal/left pause for thought. Is such a possibility really worth this peculiar multicultural experiment of forcing two disparate cultures together, in a perverse attempt to prove history (and present day reality around the non-Western world) wrong?

Even the most vacuous multiculturalist would have to admit that religious war is a possibility, but what percentage chance would he admit to? Suppose it was only 1% — is that a risk worth taking? My only question to him would be “would you fly on a passenger jet that had a 1% chance of crashing, and if you would not, why do you think it acceptable that your children will inherit Armageddon based on a statistical chance of death that you yourself would not take?”

The completely unknown Serbian, Gavrilo Princip, provided the spark that ignited the First World War when he assassinated the Arch Duke Franz Ferdinand in the little-known town of Sarajevo on June 28th, 1914.

In the Europe of 2007 the ingredients for the Third World War are in place, save for Islamic demographics, an issue rapidly being addressed. Will it be a Dwayne Sproat or an Achmed Al-bubba acting as the present day Gavrilo Princip who sparks it?