Fascism and Nazism have deep roots, even in the United States of America. 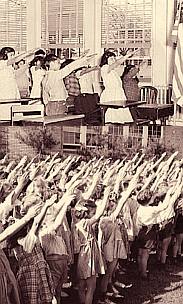 A compelling demonstration of this sad fact can be found in the seemingly innocuous Pledge of Allegiance, which was originated in 1892 by Francis Bellamy. Many Americans are unaware of the fascist origins of the Pledge.

The photos at the left show American schoolchildren saying the Pledge of Allegiance during the first half of the 20th century. In those days, as you can see, pledging the flag included a gesture known as the “Bellamy Salute”, which was identical to the “Sieg Heil” salute made notorious by Hitler’s Nazi regime!

Untold thousands of American schoolchildren were corrupted by this devious indoctrination until the U.S. government became aware of the practice and put a stop to it.

Originally, the pledge was said with the hand in the so-called “Bellamy Salute,” with the hand resting first outward from the chest, then the arm extending out from the body. Once Hitler came to power in Europe, some Americans were concerned that this position of the arm and hand resembled the salute rendered by the Nazi military. In 1942, Congress established the current practice of rendering the pledge with the right hand placed flat over the heart.

Obviously, anybody who ever engaged in this kind of proto-Nazi behavior has been tainted by the practice and should be considered unfit for any decision-making position in our nation’s public affairs. Most Americans are unaware of — and would be shocked by — how many of their respected political leaders have engaged in this repugnant practice.
– – – – – – – – –
Historians have tentatively identified at least two current political leaders in the above photos. In the top photo, the boy who is second from the left (in the back) appears to be Sen. Carl Levin (D-MI). In the bottom photo, the seventh child in the fifth row back is thought to be none other than Sen. Edward Kennedy (D-MA).

Citizens should demand that the leadership of our country be cleansed of former proto-Nazis. There is no place in public office for anyone with this kind of stain on his or her record.

48 thoughts on “That Fascist Pledge of Allegiance”