I recently posted a summary report about last month’s Counterjihad Brussels 2007. Controversy and acrimony have swirled around the conference since shortly after the participants left the Flemish Parliament building that afternoon and boarded trains or planes to make their way home.

For a change of pace, here is a simple narrative of what happened in Brussels.

It all started because of the Danes.

Early this year, when we started having discussions about what we could do on behalf of the European members of CVF, I suggested that Denmark was the place to start, because Denmark is different. The Danes have demonstrated that they are ahead of the rest of us in the West when it comes to resisting the Great Jihad, so it was only natural that the first Counterjihad summit should be held in Copenhagen. I worked with my Viking contacts to set up a meeting hosted by SIAD, with attendees coming mostly from Scandinavia and the UK.

After the April meeting the question was what to do for a follow-up. We decided to plan a conference to support the SIOE demonstration scheduled to take place in Brussels on September 11th. The logistics turned out to be impossible — too many Americans had to be here in the USA for the 9-11 anniversary, and a good venue could not be found until the following month. The meeting was rescheduled for late October. The European and the Flemish Parliaments proved to be excellent locations, given the serious security requirements and the large number of people who eventually attended.

The initial invitations were taken from Gates of Vienna’s list of correspondents, translators, and blogger contacts, but rapidly expanded as other people became involved. As our speaker list grew — to include Robert Spencer, Andrew Bostom, David Littman, and Bat Ye’or, among others — so did the workload. In order to make it happen, for three or four months some of us had to cut back seriously on our sleep.

After dozens of meetings and preliminary visits to Brussels, after hundreds of phone calls, after thousands of emails — finally, on October 18th, we sat down on the dais at the European Parliament, and I had the honor of being the MC for an unprecedented group of anti-jihad activists from fourteen countries — people from universities and free speech associations, from human rights groups and right wing political parties, and from local neighborhood groups. Oh — and, yes, even several bloggers.
*   *   *   *   *   *   *   *   *   *   *   *   *   *   *

My first stop on the Continent was in Antwerp on Tuesday, October 16th, where Robert Spencer was to make a speech and sign books. 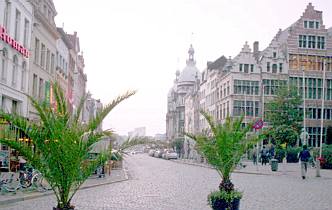 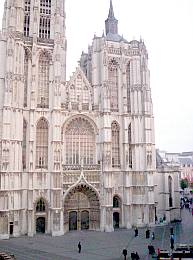 The hotel was just off the square in front of Antwerp Cathedral — the photo at left was taken by hanging the camera out of the window of my room and taking a snap in approximately the right direction.

When I arrived at the hall where Robert spoke, our hosts ushered me to an empty chair where the following sign awaited me:

I can only assume that “Voorbehouden” is Dutch for “Reserved”.

Robert’s speech was comprehensive, expertly-delivered, and well-received by the audience. He was mobbed for a half hour or so afterwards as he signed books and posed for photographs.

After the book-signing, I joined Robert, Paul Belien, and several other people for drinks and conversation at a table on the sidewalk in front of a pub in downtown Antwerp. The weather, according to Paul, was unusually good — Belgium is noted for its rain — and many people took advantage of the mild temperatures to sit at the sidewalk tables.

Wednesday morning was rainy, and although I took a brief walk up to the castle on the river, sightseeing was not really an option, and by lunchtime that day I was in Brussels.

Steen took the above photo of downtown Brussels. As you can see from the close-up at right, the tall sign on the skyscraper celebrates the fiftieth birthday of the European Union in several languages.

This was only one example of the “Happy 50th” propaganda spread all over Brussels. Just off Schuman Square, alongside one of the EU buildings, a long wall was dedicated entirely to a celebration of all the wonderful things that the EU has done since 1957. Coupled with the gargantuan ultra-modern architecture and the heavy security presence, the atmosphere was overwhelmingly Soviet — this was a version of the USSR turbo-charged with all that Western European money and slathered over with a suffocating layer of multiculturalism.

The whole effect was creepy.

Wednesday at the Flemish Parliament was spent preparing materials for the next day’s events, printing, photocopying, stapling booklets together, etc. Later that evening attendees began to gather at the hotel in downtown Brussels. I had the pleasure of meeting people I’d previously known only through email or skype conversations. Among the old friends I finally met in person that night or the next day were KGS, Conservative Swede, Jens Anfindsen, Lars Hedegaard, Rolf Krake, Paul Weston, Gandalf, Cimmerian, and Yorkshire Miner.

Many veterans I’d met at the Copenhagen summit were also in Brussels, including Steen, Skjoldungen, Zonka, Aeneas, Reinhard, and several other European members of CVF. Pamela Geller and Nidra Poller, whom I had met last year at a PJMedia event in DC, arrived on Thursday.

As a result of the CVF events in Copenhagen and Brussels, I have met in person more than half of our European contributors, correspondents, and translators.

On Wednesday evening a large contingent of us went out together for dinner (French cuisine), and most of us returned afterwards to the hotel bar to enjoy Duvel, Stella Artois, and conversation well into the wee hours.

I’ve already reported extensively on Thursday’s proceedings at the conference itself, and there will be further reports later. The occasion was an electrifying one: we were gathering in the heart of Eurabia to listen to Bat Ye’or and all the other speakers talk about the Islamization of Europe. 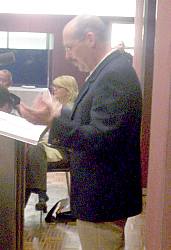 After the day’s events we moved to the Flemish Parliament for a working dinner, and listened to speeches by Robert Spencer and Andrew Bostom during and after the meal.

Later that evening several groups of people went their separate ways to explore the pubs of Brussels. I elected to stay at the hotel bar and talk to Skjoldungen, Yorkshire Miner, Steen, Pamela, and Robert Spencer. Apparently, based on later reports, some of the conference attendees — you know who you are! — sampled the adult beverages of downtown Brussels at such length on Thursday night that they were unable to attend the morning session on Friday.

Even so, the next day’s working groups were very productive, and when we convened that afternoon for the final plenum there was a sense of renewed optimism about our grassroots efforts to resist Islamization and to stop the encroachment of sharia in our various countries.

The Center for Vigilant Freedom was founded a little over a year ago as a “network of networks”, a facilitator of worldwide communication and shared effort among the various groups that are resisting the Islamization of the West. We came together as group of like-minded people who had had enough of talking about the problem, who shared an urgent desire to do something.

Numerous other groups share the same goals and work towards the same ends, and we support and coordinate with them as much as possible. Given our handicaps — the almost universal indifference and hostility towards our aims by the media, the academy, and our own governments — it is important to look for what we hold in common rather than fight over our differences.

None of the Counterjihad movements will be successful if it insists on absolute purity of doctrine and an absence of adverse political baggage. We support the work of any group that shares our primary goals:

More than seventy people from fourteen different European countries — plus Canada, Israel, and the United States — met with a common purpose. Being face to face so many talented and accomplished colleagues energized us all, and laid the groundwork for future efforts in Europe and throughout the West.

I have written repeatedly in this space that we’re on our own — that is, our governments have effectively abandoned us, and our media and most of the educated elites in our countries actively work against us.

But all that has begun to change.

Every person who showed up in Brussels last month probably felt that he was on his own. But our conference allowed people to meet and to pool ideas and to discover that they were part of a larger network.

There is a long road ahead of us. The rollback process will take at least a generation, which means that I probably won’t be around to see the dénouement.

But when I looked out across the audience in the European Parliament on October 18th and saw all those young people, it was heartening to realize how many of us there will be to see our efforts through to their conclusion.

Popular sentiment in Europe and elsewhere supports the resistance, but political change comes slowly. Politicians must first feel a strong pressure from the electorate, which hasn’t happened yet. With the blinders imposed by the media and the demonization of anyone who shares our goals, a widespread concerted sentiment is difficult to achieve and maintain.

If we set our sights on what we can actually do, rather than what we wish our elected leaders would do, then the process of real change can begin.

The new networks are forming. The word is getting out.

We are merely the switchboard operators of this new communication system. Or, to use a more up-to-date metaphor, we are the network cables, routers, and hubs of the newly-formed resistance.

And we are just one of many such networks. Efforts like ours are forming throughout the West like frost on a wintry window. They don’t make it onto the TV news or the Reuters wire — they are, after all, the most egregious of MSM heresies — but they are forming all the same.

If I can think of things like this, you know that thousands or even millions of people are coming up with the same ideas simultaneously.

This is a distributed emergence.

The action in just getting started. Stick around to see what happens.

16 thoughts on “Slouching Towards Brussels”