Yesterday my post, One Man Challenges the World According to Gore, ended this way:

…And just because Gore’s bizarre theories are being discredited doesn’t mean we will stop hearing from him. just as Jimmah from the Ummah remains quite visible in the pages of the MSM, so will Gore.

Come to think of it, both of these charlatans are excellent examples of the Peter Principle. The Nobel Peace Prize seems to have more than its share of charlatans. A century from now their nominee lists will be as respectfully remembered as an “Inconvenient Truth.” The mills of God grind slowly… 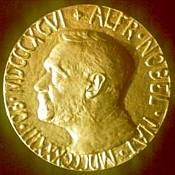 Imagine my lack of surprise when I awoke this morning to see that ol’ Al had indeed won the Nobel Prize. I hadn’t been paying attention to the fact that the Nobel Committee would shortly be handing out their awards and largesse. Perhaps because the Nobel Committee has been meeting for over a century now, I have merely absorbed it by osmosis. But how risibly sad (in other words, I don’t know whether to laugh or cry) is it to think I could predict, without even knowing who else was on the list, that Albert Gore, Jr. was going to win. Ever since the mendacious Jimmah got his, the tarnish on that medal has increased.

Lord knows both of these jokers lobbied hard for the medal. And anyone who would see Jimmah as worthy material for this award would certainly put Algore in the same category. I definitely see the similarities of character and endeavor in these fine specimens of American political life.

This year’s winners beat out a long list of candidates around which speculation had swirled for weeks. Included among them were human rights champions including Irena Sendler of Poland, who saved 2,500 Jewish children during World War II and Thich Quang Do, a Buddhist monk in Vietnam. Former Finnish President Martti Ahtisaari also has been a longtime candidate because of his peace-broking efforts in the Aceh conflict in Indonesia.

Although the Nobel Committee doesn’t reveal nominees, it’s also believed that the Salvation Army has been a longtime candidate for the Peace Prize. All told, 181 candidates were nominated for this year’s Nobel Peace Prize, including 46 organizations.

Imagine! 181 nominees and they choose Gore and the UN’s IPCC for their Prize. This will be one they come to regret in the next few decades.

Climate Science is a good source for information on the vagaries of climatology studies. It brushes aside the heavy politics of this issue to deal with the science. What a novel idea —

“Research to-date has revealed the need to establish the limits to predictability within the Earth System. It has been shown that climate prediction needs to be treated as an initial value problem with chaotic behaviour. This perspective acknowledges that beyond some time period, our ability to provide reliable quantitative and detailed projections of climate must deteriorate to a level that no longer provides useful information to policymakers.”

The significance of this message has still has not been recognized, as exemplified by the NCAR press release of October 19, 2006 of entitled “Expect a Warmer, Wetter World this Century“ which is based exclusively on multi-decadal global climate predictions (the issue of publishing climate predictions as forecasts in peer reviewed journals is a topic we will pursue in depth in a later weblog; we certainly do not publish weather forecasts before the event occurs, in a peer reviewed journal!).

This quote alludes to several key issues in the global climate furfural. The first is chaotic systems, of which climate is a good example. How much does the average person understand about chaos theory? In fact, how much has the unscientific (if not anti-scientific) Algore explained to his disciples about how chaos operates? Working within a chaotic universe, predictions are often not much more accurate than auguries or reading tea leaves. That’s why weather forecasting is so often off the mark.

So if meteorologists can’t get the weekend’s weather forecast right, how can anyone predict with accuracy the next decade’s climate?

The charlatans who talk about computer models fail to tell us about the parameters of what they feed their machines. The old maxim, “garbage in, garbage out” applies equally in climatology as it does in other fields of science that are highly politicized. Those with the most apocalyptic stories to tell are the ones who get funded. Scientific investigations which simply set out to discover how the world works don’t get funded. And if your research doesn’t get funded, your university position quickly comes into question.

“Research” is designed to bring in money and thus it is politically-driven, because that’s where the money bags are piled. Governments and foundations are not going to back scientific investigations that don’t predict dire consequences. They need meaty, apocalyptic problems in order to justify governmental bureaucrats who exist in order to lavish money on looming disasters. They need large, global problems to solve via committee hearings, and study groups who whip up fear via scare-mongering. This round robin serves its purpose: to increase a further influx of money for “vital” problems that only government can solve. Thus, funds are dispensed to those Henny Pennys who cry the loudest.

The fact that we don’t live in a perfect world is something to be celebrated rather than deplored. It leaves us with the inherent existential knowledge that our reach will always exceed our grasp. Those who want to have it otherwise are the ones who cause the world the most trouble. Their vision of a perfect world is diabolical, no matter how alluring.

Scrappleface (for our European readers, S. is a wonderful satirist) has weighed in with his tongue-in-cheek essay on the Gore and his prize:

Although former Vice President Al Gore won the Nobel Peace Prize this week for his work as a global-warming performance artist, the U.S. Supreme Court ruled early today that President George Bush would receive the gold medal, the diploma and the $750,000…

Mr. Bush, who was narrowly defeated by Mr. Gore in the 2000 presidential election, thanked Justices John Roberts and Samuel Alito “for swinging the vote my way, and helping me to join the pantheon of great Nobel laureates like Jimmy Carter and the late Yassir Arafat who together brought peace to the middle east.”

Mr. Gore could not be reached for comment as he was returning from Oslo, Norway, in a private jet. However, his spokesman said that his efforts to bring peace on earth speak for themselves.

“Thanks to Al Gore’s movies, speeches and books,” said the unnamed spokesman, “Terrorists and tyrants around the world will soon lay aside the weapons of war and give peace a chance by working together to develop a hybrid car that runs on cheap, clean-burning gunpowder.”

I repeat: ScrappleFace is satire. His motto — News Fairly Unbalanced. We Report. You Decipher — explains his motive. Scrappleface has such a dry wit and his mockery is so devious that sometimes you have to read him more than once to pick up all the little barbs. Just to note one in this example of his work, see Mr. Bush, who was narrowly defeated by Mr. Gore in the 2000 presidential election…. For the restless Left, this is gospel and George Bush’s presidency is, and always will be, illegitimate. For that matter, in their eyes ol’ George is illegitimate to begin with. But my favorite line in this particular post is the one about the hybrid car that runs on gunpowder. Kaboom! to you, Mr. Nobel.

In the final analysis, I don’t understand why the Salvation Army is always the bridesmaid at the Nobel nominations. The work they do — and I’ve seen it first hand in their homeless shelters, one of which is nearby — is productive and improves lives on a daily basis. They both feed the hungry with loaves and fishes and teach them how to fish. They’ve been doing this since 1865, for heaven’s sake.

As I said, we don’t live in a perfect world. Thus the likes of Gore can triumph over the venerable history of the Salvation Army. Yet long after his theories and bombast are but distant, embarrassing echoes, the Salvation Army will be carrying on as it has since its beginnings.

Now, for the real issue here: who’s taking bets? What do you think the chances are that Gore will use his award as leverage in the 2008 presidential campaign?

Don’t look back Hillary, but ol’ Al may be gaining on you. He’s Al Gore, he doesn’t have to obey the speed limits.