The Danes are not like the rest of us. Picking adjectives to describe the Danish character is difficult; “brash” and “irreverent” don’t quite cover it.

So it’s no surprise that when Denmark holds an election, it’s an occasion for high theater. One of the parties fielding candidates in the current parliamentary election campaign is going to revive the Motoons as part of its advertising.

The nationalist Danish People’s Party will use drawings from the Mohammed cartoon affair during the election campaign to highlight its support of free speech, reported Nyhedsavisen newspaper Thursday.

The cartoon drawings of Islam’s holiest figure, first published in September 2005 by Jyllands-Posten newspaper, caused intense furore throughout Muslim communities both in Denmark and in the Middle East.

Pia Kjærsgaard, the party’s leader, said she was not afraid to use the drawings to provoke a response in voters — positive or otherwise.

‘Why shouldn’t we do it?’ Kjærsgaard asked. ‘It was because of the Mohammed affair that we openly discussed the free speech rights we were beginning to lose. Censorship is evil.’

‘Pia Kjærsgaard just wants to use the drawings to provoke us and attract attention,’ said Ahmed. ‘Our current policy is to ignore the Danish People’s Party and she’s not worth the trouble.’

It’s a sign of the effectiveness of the stalwart Danish response to the Motoon crisis that the Muslims are ignoring Dansk Folkeparti instead of plotting to behead its leaders. It shows that standing up to the Islamic bully is the right tactic — when you look him in the eye and tell him to f*** off, he slinks away, muttering, “Aah, who cares about dat little joik, anyways?”

But it’s not actually one of the twelve original Motoons that will be used in the campaign. The blasphemous drawing in question will be taken from a 17th-century illustration used in an early translation of the Koran into English.

This week Denmark’s Prime Minister Anders Fogh Rasmussen called elections for November 13, and today Danish People’s party announced that they will place election posters around the country with a cartoon of the Muslim prophet Mohammed. 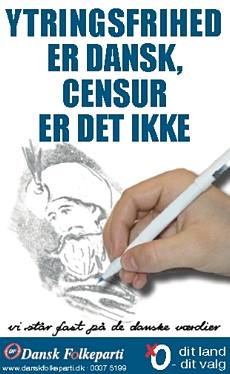 They do not hide that they are inspired by the cartoon crisis in 2006 that put Denmark in the headlines around the world. Demonstrations and violence in the Muslim world erupted.

The cartoon is drawn from a portrait of the prophet from a book about Islam by Alexander Ross published in 1683. Ross was behind the first translation of the Koran into English (1649). The poster reads “Free speech is Danish, censorship isn’t — we stand by our Danish values”.

In an interview with Nyhedsavisen party leader Pia Kjærsgaard explains the reasoning behind the decision to put Mohammed’s face on election posters.

“It’s part of our campaign for Danish values and we want to draw attention to those values. Among others they include equality between the sexes, solidarity and other things. This election add clearly has to do with the right to free speech.”

Why do you run this add after the violence during the cartoon crisis?

“Why shouldn’t we? Is it forbidden? On the contrary, we have had a very comprehensive debate, that was very good because we spoke about the values we were in the process of losing. We have to stick to those values. We would never have spoken about these matters if it hadn’t been for the cartoon crisis. Self censorship is a bad thing.”

Don’t you think that you are undermining the diplomatic effort by the Prime minister to calm down the situation during the crisis?

“No, I don’t think so. It would be self censorship if we were thinking that we shouldn’t do something like this.”

Did you consider the risk of provoking violence with this ad?

“No, that hasn’t been part of our deliberations about publication of the cartoon.”

Here’s what’s important about this: The threat of Muslim violence hasn’t been part of their deliberations about publication of the cartoon.

The threat of violence should never be a consideration when any group plans peaceful and lawful activities. When you modify your plans in anticipation of a violent reaction, you have ceded control to the Islamists as effectively as if you elected them to the parliament and allowed them to enact the country’s laws.

The The Grauniad has its own special take on the new Motoon affair, choosing the notorious terror apologist Asmaa Abdol-Hamid to represent the enlightened Islamic alternative to the “far-right” Dansk Folkeparti:

A far-right Danish political party controversially depicted the prophet Muhammad on election material yesterday. Now a high-profile Danish-Muslim politician has hit back with a poster lampooning the move.

The ad by the Danish People’s Party, the country’s third largest political force, showed a hand-drawn picture of the Islamic prophet under the slogan “Freedom of expression is Danish, censorship is not”. The ad was condemned as a “provocation” by at least one Danish-Muslim group, as Islam forbids representation of its most important prophet.

Now Asmaa Abdol-Hamid, a Danish-Muslim politician who could become the first MP to wear the hijab in the Danish parliament if elected in next month’s poll, has hit back with a poster showing a hand-drawn picture of the DPP leader, Pia Kjærsgaard, under the slogan “Freedom of expression is Danish, stupidity is not”.

Ah, what wit! What subtlety! That’ll show those fascist bastards over at DPP, won’t it?

“It is ridiculous [of the DPP] to do that kind of thing,” Ms Abdol-Hamid told Guardian Unlimited. “It’s not clever, there is no point to it.”

“You have to think before using freedom of expression,” said the town councillor for Odense, and a member of the leftwing Red-Green Alliance.

We’ve often pointed out how tone-deaf most Muslims are about humor. When it comes to ridicule and satire, they simply don’t get it. Their possible responses — violent frenzy or self-righteous priggish indignation — display no comprehension of the motive force behind satire, or the reason why it is effective.

If one is the brunt of an effective satire, the best response is to laugh heartily along with everyone else, and then to compose an equally effective counter-satire, or to ignore the whole business entirely.

But Muslims in the West can’t seem to avoid the pitfall of responding to every amusing insult of their “honor” with prissy high-dudgeon, thereby making themselves look even more ridiculous.

As it happens, the Danes have already had a go at Ms. Abdol-Hamid: 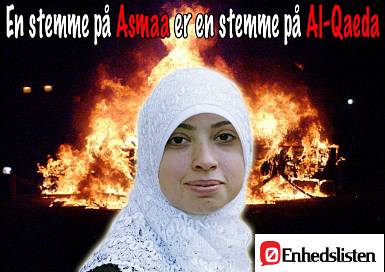 
Every time a Muslim gets outraged by the tactics of the Danish People’s Party, the DPP potion of the vote will increase by a percentage point. Wait and see.

5 thoughts on “The Motoons on the Hustings”