In her post on Bobby Jindal’s victory in Louisiana, Michelle Malkin takes aim at a common political phenomenon in this country: 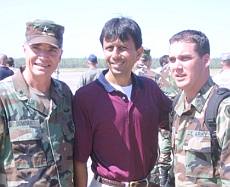 American success stories like Bobby Jindal, however, are their worst nightmare. It’s a slap in the face of leftist identity politics for a minority conservative to succeed in politics on a platform of faith, self-reliance, free market advocacy, and individual responsibility. And to succeed in the South? Intolerable!

Ms. Malkin has a link to the subtle sneer The New York Times ran the week before he actually won. Since the outcome was never in doubt, the Slime had to leave a trail across his certain victory.

I’m not going to quote the whole tendentious thing. I’ll excerpt enough to fisk their all-too-obvious disappointment in the fact that Louisiana has a real conservative Republican governor:

An Oxford-educated son of immigrants from India is virtually certain to become the leading candidate for Louisiana’s next governor in Saturday’s primary election. It would be an unlikely choice for a state that usually picks its leaders from deep in the rural hinterlands and has not had a nonwhite chief executive since Reconstruction.

Bill Clinton was Oxford-educated, too. What is the point here – that Governor Jindal is out of touch with the country folks because of his education? That didn’t hurt Bill in Arkansas, but never mind. The NYT isn’t about fact, it’s about attitude.

This is a jab at Bobby because they know he’s too intelligent for them to be able to play the usual (and fallacious) “dumb Republican” theme they like to sing in harmony about dimwits like Ronald Reagan or George Bush…
– – – – – – – – –
One wishes they’d get new lyrics. Only the Bush Derangement Syndrome sufferers believe that lie anymore. Come to think of it, though, I did have a (Democrat) lawyer ask me if our Congressional Representative, Virgil Goode, was really as stupid as people say. I looked at her levelly for a moment before reminding her that he was a Phi Beta Kappa and had graduated from the same law school she attended. Not only that, but during his time there he was selected for The Virginia Law Review (she wasn’t). My response terminated the course of that conversation, but I didn’t change her mind about Goode’s essential stupidity. In leftist circles it is accepted without question that anyone who chooses to be a Republican (Goode actually left the Democrat party and went to the other side of the aisle) is inherently dumb.

By the way, note the sneer about Louisiana’s long-standing racism. They may not have had a “nonwhite governor” for almost a hundred and forty years, but they sure have had their share of African American politicians in the state. Who can forget the lovable “like chocolate on New Orleans” Mayor Nagin?

Read these next excerpts carefully. They are cleverly wrought:

Louisiana Democrats are demoralized, caught between the perception of post-hurricane incompetence surrounding their standard bearer, Gov. Kathleen Babineaux Blanco, who is not running for re-election, and corruption allegations against senior elected officials like William J. Jefferson, the congressman from New Orleans.

See, Governor Blanco was not really incompetent, it’s merely a perception. In reality, Governor Blanco froze in the face of calamity and famously started crying because she didn’t know what to do.

Leading Democrats begged off the governor’s race, and Mr. Jindal’s opponents are from the second tier, trailing so badly in polls that Mr. Jindal has ignored most of the scheduled debates among candidates, leaving the challengers to take grumbling verbal shots at his empty chair.

In other words, the Big Guys let Jindal have the governor’s seat. They simply put their minor leaguers out to pitch against him, so of course he won. It has nothing to do with his smarts, his appeal, or people’s hopes that for once Louisiana could escape their incompetent, corrupt politicians.

And how about this for sour grapes?

The prize is not necessarily an enviable one: Louisiana is the nation’s poorest state, measured by per capita income; one of its unhealthiest; the worst in infant mortality; and the least educated. It is last in attracting new college-educated workers. Tens of thousands of people remain displaced by Hurricane Katrina, the police department in New Orleans still operates largely out of trailers, and neighborhoods are still trying to rebuild.

Louisiana is indeed all those things. It is also one of the most corrupt states in our union. Corruption breeds this kind of third world ineptitude. As Governor Jindal put it:

Good luck, Governor. Just don’t bother reading the Slime if you want the real story about anything. The smartest initial move any American politician can make is to ignore The Old Grey Doxy. She ain’t what she used to be. Or maybe she never was.

I don’t suppose anyone has to warn you not to buy any NYT stock.