I reported last night on the Oriana Award, which was given to Bat Ye’or during Counterjihad Brussels 2007 by the Italian delegation. Since then Steen has sent me photos of the presentation; one of them is shown below: 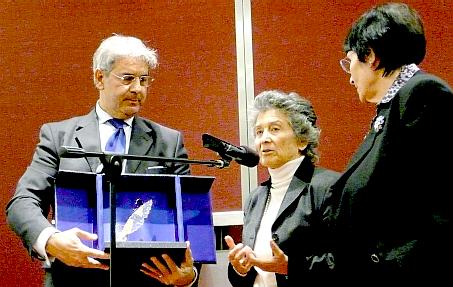 Bat Ye’or gave a sobering keynote address at the conference, describing in some detail the process that has created Eurabia, and outlining the ongoing efforts by the EU, the OIC, and various NGOs that are leading inexorably towards the full Islamization of Europe.

The “Eurabia” process is a not a secret one; however, it is not well-known to the general public, because it is buried under cubic acres of official EU working documents, treaties, and declarations of intent. Consider the Islamization of Europe a purloined letter, lying in full view of anyone willing to overcome an aversion to mind-numbing bureauspeak and take a serious look.

Ms. Ye’or has done all the requisite work, and has laid out all the details of what has become known as Eurabia.

Her speech, along with other materials from Brussels, has been posted at Counterjihad Europa. Others will become available as the transcription and conversion of documents is completed. Here is an excerpt:

I will start by a warning: have no illusions. The Eurabia in which we live is solidly established although there are some improvements since the election of Angela Merkel and Nicholas Sarkozy, and also the realization by more and more people that things cannot go on like this. For 40 years Eurabia has built its networks, its finance, its hegemonous power, its totalitarian control over the media, the universities, the culture and the mind of people. If one wants to end this system, one will have to reverse decades of policy…

Eurabia grew within the growth of the European Community (EC) and then the European Union (EU). It was conceived and planned by the European Council and implemented by the European Commission as a supranational policy, linked to the European Community interests and immediate security concerns over terror and energy supplies. The EC correlated a massive Muslim immigration to a strategy of peace and stability in the Mediterranean, hoping that the Euro-Arab symbiosis through economic development, soft diplomacy and multiculturalism would guarantee peace, markets and oil. In the Euro-Arab policy, Muslim immigration is welcomed as an element of a Mediterranean geo-strategy conducted as a partnership with the Arab-Muslim world on the base of pacifism and continual funding and services provided to the Arab world, similar to the subsidies given to the economically underdeveloped EU member-states. The European Investing Bank is the model for the Mediterranean Investing Bank.

This strategy had also an ideological perspective: the refusal of any more war — peace at last by resorting to economic agreements and mutual concessions. However this laudable formula, which succeeded for the integration of Europe, was not adapted to deal with a Muslim world that conceived its international relations only in the framework of jihad. Worst, the Nazi evils came back with a vengeance in the Euro-Arab alliance so similar to the Vichy-Berlin-Arab and Palestinian Nazi and Fascist axis of the thirties and forties against Jews, democracies and America. These evils had not died after World War II, and they reemerged within the Eurabian-Arab Palestinian jihad against Israel.

Let us see how the secret Arafat-EC alliance has transformed Europe. Threatened by Palestinian terrorism in the late 1960s and the 1970s, and by an oil boycott, Europe searched for protection under the wings of those who threatened her. The conditions were: oil and peace for Europe in exchange for a hostile policy toward America and Israel, and most important, European support for Arafat and the PLO, a jihadist and international terrorist movement. Since that moment, Europe entered into the vicious cycle of dhimmitude and self-destruction by justifying jihadism. It developed a culture of hate against America and Israel and paid billions as a security ransom to the Palestinians. Likewise, it opened its gates to massive Muslim immigration according to agreements with the Arab League countries.

This choice of a policy based on fear, ransom and surrender, and on the justification of jihad has blinded Europe to its dangers. Allied with the PLO and the Arab League, the EC denied the threat of global jihadism. This denial, fundamental to Eurabian policy, motivated the appeasement and peaceful surrender to jihadists while pretending that Europe’s enemies were American, but above all, Israel’s policies of resistance to jihad. Hence, Europe transferred onto Israel and America the threat of a terrorist war to which it had already capitulated.

It is “Palestinianism” — the most cherished European ideology because it is the very guaranty of its security against terror — that has determined European support for jihadist tactics. And jihad is not like any war, it represents a whole theological corpus of war, with its holy strategy and ritual tactics of air piracy, terrorism, abductions, beheadings and killings of civilians.

For the Arab and Muslim world, Palestinianism embodies the ideology and aims of jihad against a rebellious dhimmi people. Based on a Muslim culture, history and theology, it denies territorial independence and sovereignty to any non-Muslim people. Such a position is self-defeating for all non-Muslim states, and particularly Europe. Palestinianism is at the root of Europe’s self-destruction. [emphasis added]

The full text of Bat Ye’or’s keynote speech is available here (in pdf format). I recommend that you print and distribute it to anyone you know who thinks “Eurabia” is a paranoid fantasy.

And for those who think America is exempt from all this, bear in mind the “North American Union”. The NAU is also considered a paranoid fantasy by most people, but it is being constructed in the same manner, piecemeal, boring document by boring document. Agreements, protocols, joint understandings, etc. — none of them requires the consent of Congress. They are not secret, but they are never noticed by the public at large, and so never generate any popular counter-pressure on our elected representatives.

Imagine a European Rip Van Winkle, who went to sleep in the 1950s, during the heady days of the “Common Market”, when removing trade barriers was supposedly the only issue. Waking up fifty years later, he discovers that a totalitarian European regime has been imposed from Brussels, without so much as a by-your-leave from the citizens of the nations of Europe.

It begins with the removal of trade barriers. Then comes the talk about “the free flow of goods and people”. Then the “harmonization of laws within the Community”. With PC-Multicultural indoctrination to grease the skids, no one notices until it’s too late. They wake up and find that their God-given rights have evaporated, and decisions are made on their behalf and without their consent by a distant and unaccountable corps of bureaucratic mandarins.