I’m writing this several days ahead of time. By the time you read it, the two-day Counterjihad Summit in Brussels will have concluded, and all the participants will be on their way home.

The summit was sponsored by the Center for Vigilant Freedom, and took place at a location in Brussels which included plenty of space, and provided video- and audio-conferencing capabilities.

Participants came from Austria, Belgium, the Czech Republic, Denmark, Finland, France, Germany, Israel, Italy, the Netherlands, Norway, Romania, Sweden, Switzerland, the UK, and the USA. Virtual attendance by video was also available, and at least one blogger from Australia took part in the conference this way.

The purpose of the event was to provide liaison and interconnection among various European anti-Islamization groups and their counterparts in the United States, Canada, Australia, and elsewhere. We also hope to connect interested activists with groups anywhere in the world who share common goals and a mission that is worthy of attention. 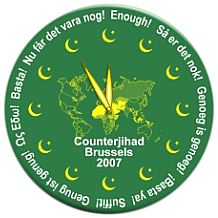 Our groups are a network of networks. CVF’s goal is to create and strengthen a web of contacts, relationships, and interlinked organizations in order to roll back Islamization and the encroachment of sharia within our countries. We want to build a robust and flexible means of communication among ourselves.

We intend to build up a coalition of people who track Islamization-related legislation in different countries. Their efforts will include actions to prevent terrorism, block the legal encroachment of Sharia, and encourage the passage of laws that protect national constitutions, limit immigration and roll back Islamization.
– – – – – – – – –
The first day was taken up with our featured speakers, all of them prominent writers and opponents of sharia and Islamization. A speaker for each country represented at the meeting gave a report on the status of dhimmitude in his or her country, and the progress of efforts to counter it.

During the second day we broke up into working groups for further discussion and networking.

Among those present were: