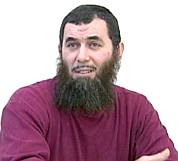 Ousama Kassir, who originally hails from Lebanon, is under indictment in the United States for conspiracy aimed at providing material support to terrorists. He has been charged with planning to set up terror training camps for would-be mujahideen in Oregon back in the 1990s. If his plans had matured, graduates from his little academies would have been sent to Afghanistan to fight alongside the Taliban.

His other alleged activities include setting up and maintaining websites giving fellow terrorists instructions on bomb-making.

Mr. Kassir had been holed up in Sweden, where he was probably safe from the long arm of American law, until 2005. Then he made the mistake of stopping off at the airport in Prague on his way to Beirut. The Czech authorities were alert; they detained him, and have been holding him in custody ever since.

And now it looks like he’s going to be extradited to the United States to face the music. According to the Prague Daily Monitor:

The Prague High Court on July 17 upheld the April verdict by the City Court in Prague saying that Kassir’s extradition is admissible. The decision was confirmed by Pospisil on September 18.

“The minister decided in harmony with the Czech Republic’s commitments in the field of international cooperation in fight against criminal activities,” Kuncová said.

However, Kassir’s lawyer Umar Switat said previously that international agreements on the basis of which Kassir can be extradited do not apply to any of the accusations against him.

“The USA has provided the Czech Republic with the highest possible guarantee, in the form of a diplomatic note issued by its embassy [in Prague], that Oussama Abdullah Kassir will not be detained or imprisoned in other than civilian facility after his possible extradition to the USA,” Kuncova said.

“This means he will not be imprisoned at the Guantanamo base and will not be put before the military commission,” Kuncova said.

But Mr. Kassir hasn’t lost all hope; the appeal process has not been exhausted:

Not all legal means have been exhausted. A constitutional complaint could have been filed against the High Court’s decision, so the ministry’s secret and unusual procedure is a gross violation of law, Switat said.

The ministry reacted to this saying that Kassir’s extradition was in line with law.

The suspected terrorist is afraid he faces brutal treatment at the hands of the American justice system:

Kassir has dismissed all accusations, saying he is not a terrorist and has no contacts with terrorists. He has said he fears he may be tortured and given death penalty if extradited to the USA.

Oh, yes, that’s what we do here. Everyone knows how routine torture is in this country. Mr. Kassir is likely to face a reduced falafel ration while he’s in stir. Or be subjected to Britney Spears songs played at top volume. The horror!

Life was easier in Sweden. He didn’t have to hide his activities, or skulk around like a criminal:

However, when still in Sweden, Kassir did not hide his admiration for Osama bin Laden and his approval of the 2001 terrorist attacks on the USA.

The Swedish daily Expressen wrote some time ago that Kassir had asked for political asylum in the Czech Republic. In his letter to his family in Stockholm Kassir wrote that Sweden had abandoned him, the daily said.

Abandoned him, eh? I’ll bet he’s pining for the fjords right about now.

2 thoughts on “The Czechs Will Extradite Kassir”