The month of September in the Counterjihad Calendar is represented by the United Kingdom of Great Britain and Northern Ireland.

Britain may be the most thoroughly dhimmified country in the West. The UK is riddled through with soft PC totalitarianism, from the Civil Service through the police to the schools and universities. From a legal standpoint, it is much riskier in Britain today to declare that one dislikes Muslims than it is to burgle a house.

There are plenty of famous buildings to choose from for Greatly Islamised Britain — St. Paul’s, Westminster Abbey, Stonehenge, etc. — but I have chosen the tower of Big Ben at Westminster as the iconic British monument for the calendar. The clock in the tower was just too good to pass up (click for a larger image): 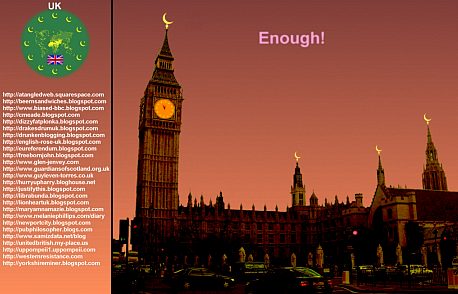 Thanks to Gaia and Aeneas for help in compiling this list of British Counterjihad websites for the calendar:

For each country involved, I invite readers to post suggested Counterjihad links in the comments, or send them via email. All except for the USA, that is, which is completely filled up.

I’m still on track to finish the 2008 Counterjihad Calendar before the end of this month, and then make it available at our Café Press site.

Next up on the calendar is the Netherlands, for the month of October.

6 thoughts on “The Counterjihad Calendar: September”