The month of August in the Counterjihad Calendar is represented by Greece.

More than any Western country, with the possible exception of Spain, Greece has suffered the most from the Hosts of Mohammed. After Constantinople fell to the Turks in 1453, the Greeks endured almost four centuries of occupation by the Muslims of the Ottoman Empire. The Turkish jihad against the Greeks continued into the 20th century, with the massacre and expulsion of Greeks in Asia Minor, particularly Izmir, in 1922. Enmity between the two countries continues to this day, and Cyprus remains a divided island.

I have chosen the Acropolis as the iconic Greek monument for the calendar (click for a larger image): 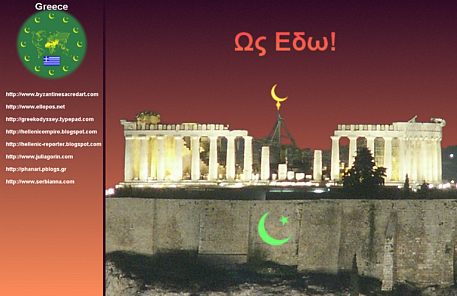 Despite the animosity between Greece and Turkey, Counterjihad Greek websites are hard to find. I have a couple of Greek contacts, and they say that there aren’t many anti-jihad sites per se, even though there is a widespread dislike of Turkey. They say that part of the problem is the stranglehold that leftist politics still has on Greek culture in general.

So the sidebar of this image is almost empty. I included a couple of Serbian-related links, since they have an Orthodox Christian focus.

Here’s the meager list of Greek Counterjihad websites for the calendar; I welcome any additional Greek links that our readers can supply.

– – – – – – – – –
I still need URLs for the remaining countries (Britain, Australia, the Netherlands, and Spain). My goal is to fill up each sidebar with Counterjihad sites.

For each country involved, I invite readers to post suggested Counterjihad links in the comments, or send them via email. All except for the USA, that is, which is completely filled up.

I still plan to finish the 2008 Counterjihad Calendar before the end of this month, and then make it available at our Café Press site.

Next up on the calendar is Britain, for the month of September.

2 thoughts on “The Counterjihad Calendar: August”