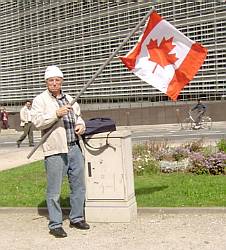 A Canadian reader sent us some photos that some of his fellow countrymen took at the demonstration in Brussels on Tuesday.

This fellow was not shy about displaying his nation’s flag.

Noticeable in these photos is, of course, the massive police presence. 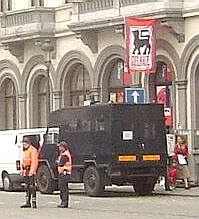 When insurrection didn’t appear, they had to make do with men in suits being interviewed by journalists. Take that, right-wing extremists!

A knot of reporters and cameramen around a police unit beating up a defenseless guy on the ground: that’s a thumbnail description of Brussels 9-11.

4 thoughts on “The Canadian Contingent in Brussels”