Thanks to the suave and sophisticated LN for this story.

There’s a state senator in Nebraska with an obviously fine legal mind. He is using this great mental sword to make sure that the current American mood regarding lawyers — i.e., they make way too much money on frivolous lawsuits — doesn’t get written into law:

Chambers filed a lawsuit in Douglas County Court Friday afternoon. However, Chambers isn’t suing God because he has any kind of beef with the deity. He says the suit is to fight possible laws restricting the filing of frivolous lawsuits.

There are those (usually to the left of us at Gates of Vienna) who say the majority of frivolous lawsuits don’t originate with individual citizens, but are overwhelmingly corporate conflicts. Here are a few examples:

The single factor most clogging the judicial system is frivolous litigation brought by corporations against corporations, which don’t involve independent trial lawyers at all. For example,

Each of these cases is more representative of the true problem of frivolous litigation.

However, the blogger making this claim has his own spin:

…because they involve a Republican constituency-business-rather than a Democrat constituency like trial lawyers, tort reform advocates don’t mention them [the corporate civil suits].

This attitude regarding tort law seems to be in a minority. Many people think that tort reform is long overdue:

An elite group of greedy trial lawyers are exploiting the legal system for their own gain. The balance has tilted too far and all of us pay more for goods then we need to and have fewer products to choose from due to manufacturer fear of exploitative lawsuits.

This is why we need civil justice reform in this country; to restore the proper balance and confidence in the system. Fewer and fewer Americans view the civil justice system as fair and just. A recent poll commissioned by the Institute for Legal Reform found that 67% of Americans believe that lawyers benefit most from the current class action lawsuit system.

The system was not intended to benefit lawyers, and yet 2/3 of Americans believe that is exactly who benefits most from the current class action lawsuit system. Undoubtedly, these two-thirds of Americans make decisions everyday — consciously or subconsciously — based on this lack of confidence in the civil justice system. That is bad for freedom. That is bad for economic prosperity and the pursuit of happiness. And, finally, it is bad for our great experiment in self-government.

As a reflection of the national attitude, there are many thousands of lawyer jokes loading down email boxes in this country. An attorney I know and admire, and one who is far to the left of me (she works for the non-profit, government subsidized organization, Legal Aid), collects these jibes. She’s a salaried attorney whose clients are the very poor — those who cannot get representation in court against landlords, bosses, etc. Her experience has generated a fine contempt for the mega-rich attorneys like John Edwards, who has made a killing in tort law, even as he plays his broken record about the “Two Americas” — the selfish rich and the deserving poor. A man with a 29,000 square foot home piad for by his share of the take on large civil suits, and who built his presidential campaign on helping the poor — seeing them as vicitms –simply has no sense of irony. But if you’re a Democratic contender, that’s part of your socialist platform and you deviate from it at your own risk.

Nearly everyone running for President is personally wealthy, Democrats and Republicans alike. However, the Dems are stuck with their statist Keynesian New Deal heritage. So they have to keep mouthing platitudes and never admitting that their programs have produced a huge metastasizing underclass in this country — a problem that didn’t exist before President Roosevelt’s Band-Aids on the Depression, or the unintended but deleterious consequences of President Johnson’s War on Poverty. Poverty, with its attendant widespread deviancy and degradation, definitely won that battle. But the Dems still hang on, pretending otherwise, and proposing more “reforms” on top of the damage they’ve already done.

Here are a few favorites from my friend at Legal Aid:

Q: What do you call a lawyer gone bad?
A: Senator
That’s why we seldom elect Senators for President in the US — D.

God decided to take the devil to court and settle their differences once and for all. Satan heard this, laughed and said, “And where do you think you’re going to find a lawyer?”

Here is an image of the first page of state senator Ernie Chamber’s suit against God. May the best person win. While the deity is not an attorney, He may still have the moral edge in this case. 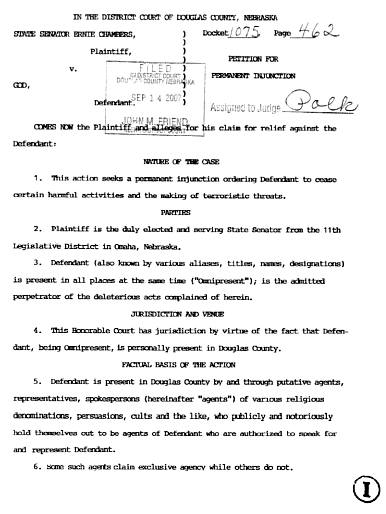 Finally, a song from Al Stewart sums up the national feeling about lawyers and tells you why so many of them grow to hate their jobs:

Lawyer jokes left in the comments will be most appreciated.

By the way, Al Stewart’s “License to Steal” is on his CD Last Days of the Century. Done with a rock ’n’ roll back beat, it makes a fine song for aerobic exercise. At the very least, it will increase your endorphin levels.