Kepiblanc is our longtime Viking commenter, translator, and correspondent. He sent us this essay this morning, on the same day that the Danish government thwarted an Islamist plot and arrested eight suspected terrorists.

On a quiet day in Denmark
by Kepiblanc

You may have noticed that Muslims all over the world have a very special gift: excellent marksmanship. No, not in the usual sense — we’ve all seen those videos featuring Allah’s holy warriors firing countless clips from their AK-47’s right into the heavens at any given opportunity and trying to hit infidel soldiers with very limited success. Their marksmanship is of another, more subtle kind. Ethereal, one might say.

Especially Danish Muslims. Denmark holds many world championships, such as high taxes, tall blondes and journalistic stupidity. But nothing rivals the unique competence of our local Muslims:

Perhaps the world record was established about a year ago when they “enhanced” the Motoon affair to global levels. By doing so they managed to ridicule themselves all over the planet and have every Dane consider them clowns. So, after the Motoon affair they’ve kept a very low profile indeed — or as we say here: “they kept their cigars pointing downwards.” 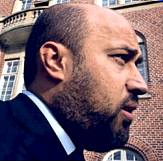 Shortly after the cartoons were — almost — forgotten, the local “führer-imam” Abu Laban died from a pulmonary malignancy and thus handed the cigar over to his successor, one Kassem Ahmad. Maybe the new rooster in Allah’s Danish henhouse then said to himself: “I need a little profiling and what with things being so quiet now — all those pesky infidels just minding their own businesses, drinking beer, eating pork sausages and one thing and another — I’ll stir them up. So our smart Kassem wrote a column. In this column he advocated the expulsion of 3 million Jews from Israel. “They should return to their countries of origin, let the original inhabitants, the Palestinians, take over and rename the land formerly known as Israel”.
– – – – – – – – –
Everything went according to his plan. His column was printed in Denmark’s biggest daily, Jyllands-Posten, and all was well. Until the next day, that is.

Of course Mr. Ahmed had foreseen some infidel reactions to his proposal, such as a letter or two to the editor. Such “letters to the editor” in the Main Street Media are always counterbalanced by an equal number of opposing letters — “a fair and balanced view”, you know. But — lo and behold — the next day the entire page of letters to the editor came up with exclusively identical opinions, namely as follows: “Let us take Mr. Ahmed seriously and deport every single Muslim from Denmark and send them home to whence they came — then we can talk”. No second opinions, not a single one. Not even a “moderate, politically correct” letter. All of them demanding: “Muslims out of Denmark”.

11 thoughts on “On a Quiet Day in Denmark”