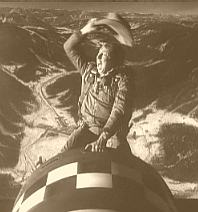 That split personality, Sigmund Carl and Alfred, ponders the plight of Jews and of the rest of the world if Iran has or will soon get nuclear weapons for use on Israel. No doubt this is a scenario that many Israelis ponder also:

The left is all a twitter because they fear a western effort to make sure Iran doesn’t get the bomb. More than one ‘analyst’ has declared that ‘we can live with’ an Iranian bomb.

Neither Israel or the west can live with an Iranian or Arab nuclear program under any of the current regimes. The risk is too high and is therefore unacceptable.

The Iranian regime leaders have gone out of their way to conceal, cheat and obfuscate everything that has to do with their nuclear programs. IAEA inspectors have been lied to and deceived on a regular basis and Ahmadinejad himself presented a bald faced lied at Columbia when he stated that the IAEA had declared the Iranian nuclear program ‘a peaceful program.’ In fact, the IAEA has concluded just the opposite.

Imagine being a black person in a neighborhood where you are surrounded by KKK members who for decades have promised to lynch you. They have no problem stating what is they have in store for you and they teach those lessons to their kids in neighborhood schools and in summer camps and even in churches. Parents display their pride as their children play games like ‘slaughter the nigger!’ and express their desire from a young age to participate in the killing of blacks.

The comparison between the Israelis and American blacks in, say, the 1920’s, is apt. Of course, the Israelis have the chutzpah to hang on while the professional victimoid Jesse Jackson and the Rev. Sharpton only serve to degrade the national conversation on race. Unlike Sharpton & Co., Israelis are not extortionists and they don’t demand reparations – though they have tried to get those Swiss banks to release the money they’ve been holding since World War II. They’ve even made some progress in that regard.

It is probable that with the ongoing help of the trouble-making Russians (“if we can’t prosper, don’t none of you get to prosper either” seems to be their motto…Putin will never make Eagle Scout) and very scrutable China (through its client state, North Korea), Iran will have nuclear weapons capable of hitting lots of places besides just Israel…
– – – – – – – – –
The French have made it plain that their nuclear weapons are not for show:

French President Nicolas Sarkozy piled pressure on Iran at the United Nations Tuesday, saying it would be unacceptable for the Islamic republic to get hold of nuclear weapons.

Sarkozy’s comments came just hours before Iranian President Mahmoud Ahmadinejad was due to address the world body, in a speech expected to attempt to play down fears of Tehran’s nuclear ambitions.

“Iran has the right to nuclear energy,” Sarkozy told world leaders at the General Assembly’s 62nd session here. “But allowing Iran to have nuclear weapons would mean an unacceptable risk for regional and world stability.”

Sarkozy added there would be no world peace if the international community “shows weakness in the face of the proliferation of nuclear weapons,” in a speech received with loud applause from the rest of the assembly.

Of course, Jacques Chirac laid the groundwork while in office. As the BBC reported in 2006:

Speaking at a nuclear submarine base in north-western France, Mr Chirac said a French response “could be conventional. It could also be of another nature.”

He said France’s nuclear forces had been configured for such an event.

France has had an independent nuclear deterrent since 1960, after an arms programme ordered by Charles de Gaulle.

Which may explain George Bush’s silence regarding Iran in his recent speeches. To talk of their nuclear weapons build up would only incense those Americans who are adamant that we do nothing about the Iranian situation. Besides, it’s time for someone else to do the heavy lifting when it comes to Tehran’s machinations.

George Bush’s hands are tied. Should he even blink on the subject, impeachment proceedings will begin. In fact, the Dems probably have all the paperwork done and are simply waiting for him to mention the problems Iran has created throughout the whole of the Middle East to start the proceedings.

So for the non, we will learn to love the bomb. And then the Democrats can deal with the problem, whining all the way that it’s Bush’s fault.

Of course it is. All the evil in the world was devised by George W. Bush. Ask anybody.

Umm, Miz Hillary – got a moment to answer a question?

7 thoughts on “Learning to Love the Bomb”