We’ve written repeatedly about the political alliance of the extreme Left with the Islamists, a phenomenon that I call the Demonic Convergence. The process is well advanced, and is becoming more and more overt.

“Solidarity with the Intifada!”


Our expatriate Dutch correspondent H. Numan sends his account of the latest manifestation of this process as it applies to Muslim apostates in the Netherlands. His conclusion is that “from now on, Islam rules their political thinking, not socialism.”

Ex-Muslims Against… Ex-Muslims!
by H. Numan

Something funny is going on in the Netherlands. All of a sudden ex-Muslims join forces with their ex- compatriots in the faith. Kind of weird, but then: in Holland everything goes. Not everything is at it seems, though. Let’s look at it in detail.

A few months ago a member of the PvdA (the Dutch labor party) announced the formation of the organization of ex-Muslims. This brave young man is named Ehsan Jami, councilman for the PvdA in Voorburg. Not surprisingly, he didn’t get much support from the upper echelons of his party. In fact, apart from outright ousting him, they did everything they could to brush his initiative under the carpet. We shouldn’t be too surprised by the very careful maneuverings of the PvdA leaders: a substantial part of their electorate is nowadays Muslim. They sent a higher member of the party to “educate”‘ this young gun, and better his ways. No need to offend their extremely sensitive voters, right? Only it didn’t work. What worked in the DDR doesn’t work in a democracy. So Mr. Jami went ahead and went public.

A few weeks ago Mr. Jami was beaten up by three members of his rejected faith. Islam is, as we know, much like the mafia: joining is easy, but resignations are not accepted. They waited for him on a Saturday near a supermarket he was shopping in. Mr. Jami and his girlfriend were beaten, insulted and threatened. This is taken quite seriously by the Dutch authorities.

Mr. Jami is now under permanent police protection and in hiding. Such are the times today.

Mr. Jami had to be treated in hospital for his injuries. One would expect some interest from his party, but no. The PvdA top very carefully didn’t utter a word. A secretary of the chairman did send a card urging him to go to hell to get better soon.
– – – – – – – – –
To my surprise I read in yesterday’s paper that some ex-Muslims denounced Mr. Jami’s efforts to form this ex-Muslim organization, and publicly supported Muslims in their faith. Kind of very, very strange. If one is apostate from one’s faith, why actively work against others who do the same? I can understand one doesn’t have to agree with the policy, but actively working against such an initiative is the last thing one would expect.

But we ain’t finished, folks. There’s more for you!

Those ex-Muslims will organize a press conference this coming Monday in -you would never guess it – a mosque. Do you smell the coffee? I sure as heck don’t. Come Monday, Mr. Peyman Jafari and Behnam Taebi will tell the world they said the Muslim religion farewell in the El Oumma mosque in Slotervaart, Amsterdam. With full support and blessing of the ‘Society of Imams and representatives of the Union of Moroccan mosques in Amsterdam’, who will be present to support those blaspheming infidels.

Ever seen a rat the size of the Empire State Building? This is one of them.

So I did a bit of research on Google. And what interesting information you can find there! As usual the media report something but not everything. So here is what really is going on behind the scenes. 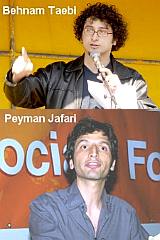 The most prominent person mentioned in the article is Mr. Behnam Taebi. He holds dual nationality, being Dutch and Iranian. Like Mr. Jami he’s also city council member. His party is the SP, the Socialist Party. His compatriot in the struggle for all proletarians of the world Mr. Peyman Jafari is also SP and IS member. That party names itself officially socialist, but in real life is Maoist.

The most extreme left wing parties, including the Dutch Communist Party (CPN), merged into the SP after the collapse of the Iron Curtain. This party stands far to the left of the PvdA in the Dutch political scene. They are doing well electorally, as they of course do not mention what they really stand for. Yes, you can right it somewhere in the manifesto. Ever met a common guy who digs into dull political party papers? Especially the ones they really don’t want you to read? I haven’t.

The SP has been very active and is popular. I have to admit it: their marketing and advertising is superb. The SP never formed part of a government, and it shouldn’t come as a big surprise that the best captains always stand ashore. During the last elections they gained 28 seats, quite substantial in Dutch politics.

But it gets even stranger. Mr. Taebi and his apostate brother in the ex-faith are also members of the “Internationale Socialisten”. This is an extreme left wing splinter organization, considered highly violent and dangerous. I quote Anti-antifa (the original text in Dutch can be found here):

The Internationale Socialisten (IS) is one of the most dangerous extreme left wing organizations in The Netherlands. This group of radicals operates mainly in universities, recruiting the more easily gullible students and is known for its violent character. The IS also has a large group of left-wing drop-outs for dirty and rough-up work. Especially during anti-globalization manifestations this organization shows it can do a lot more than just breaking a window. A lot of policemen can testify to this from personal experiences.

The IS is highly active in The Netherlands. Very few violent left wing actions take place without its involvement. They are also very active during political consultancy sessions and public debates.

Remarkable is the fact that the IS almost never operates under its name. That is because they prefer involvement in ad-hoc actions and cooperation with other organizations. This results in seemingly innocent protests as ‘Stop the War’ or ‘Stop the occupation’ without the Dutch general public knowing who really orchestrates all this behind the scenes.

Rather interesting to see is the close cooperation between the IS and fundamentalist Islamic groups. One can consider the anti-Israel position of the IS as soundly anti-Semitic. However, one should notice anti-Semitism only applies to rightwing groups but never on any leftwing organization, nowadays. Recruitment among Arabian and North African youths is high, and anti-Semitism is strongly growing within the IS.

Is this another left-wing conspiracy? You bet it is! The SP is competing with the PvdA for left-wing supremacy. Currently they do very well indeed. Mr. Jami is clearly an embarrassment for his party, and will in all likelihood be forced to leave the party very soon. He told newspapers that joining the PVV (Partij For Freedom – strongest Dutch conservative party, very much outspoken against Islam) is something he is seriously considering.

The PvdA sits uncomfortably between a rock and a hard — very hard — place. Officially they aren’t religious and until very recent actually quite atheistic. Mr. Jami’s action forces them to do what they rather avoid: de facto or de jure declare that the party rejects, I would almost say, its basic principle position on religion. De facto, the ousting of Mr. Jami is a statement that from now on that Islam rules their political thinking, not socialism. It doesn’t matter much if they state otherwise. This is what the general public will see, observe and understand. If they, extremely unlikely as it seems on the moment, would support Mr. Jami they will immediately loose a substantial part of their electorate.

The PvdA is already in very deep trouble indeed. Due to bad electoral results the party faces a management crisis. The ‘young energetic’ party leader will see a new party chairman over him very soon, and the proposed candidate Mr. Pronk – nicknamed Dronk (‘drunk’) for his dead-drunk behavior in public and as minister no less, is a relic from the 70’s. Aged 67 and looking 87, he isn’t really the nice young face one would like to see on a billboard. One would expect his face on a poster to show what alcoholism can do to the body. His political ideas are about as attractive: let’s go back to the good DDR! Communism rulez!

Even worse. If there’s anything the Dutch don’t like, it’s more taxation. Now, the current socialist coalition plans to do nice things for some people, and some others have to pay the bill. That means amongst others raising the VAT from 19 to 20%, and an additional tax on elderly people. After all, they are filthy rich. That they worked for forty years to retire in some comfort and paid taxes for that retirement during those forty years is irrelevant. The *cough* strongest shoulders must carry the burden!

Combine this with the likely ousting or resignation of Mr. Jami, and you get the idea. In a hospital one would normally ask the next of kin if they insist on further useless treatment, or should we pull out the plug and let the patient die in peace. In a garage your mechanic would say: dump this wreck. Buy a new one. Now!

Who would gain? The SP, of course. Quite understandably, they employ some agents provocateurs to fan the flames. Who would also gain? The IS of course. Communism cannot be elected; it never has, and never will. It must be enforced, and that can only happen in times of trouble. So what do you do? You create trouble.

Something else that is maybe stunning to the readers: the very close relationship between the extreme right wing groups and both the SP and IS. Not only are they enchanted by violent Muslims. They also like neo Nazis. The SP operates a list of anonymous supporters and members. Several of them, notably Mr. Steve Mordaunt, are on that list. Mordaunt disappeared from the political scene several years ago, but that is not really the point. It is striking however see how extreme left and right combine forces to create an atmosphere in which their preferred revolts can take place.

I advise Gates of Vienna readers to read your newspapers carefully, and see if you can spot something similar in your own countries.

14 thoughts on “Ex-Muslims Against… Ex-Muslims!”