A cartoon from Pallieterke, the website of a Flemish magazine: 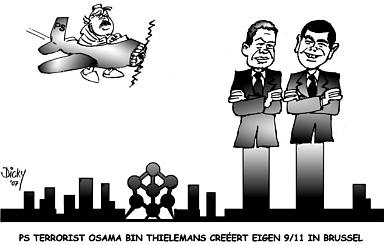 For those of you who are unfamiliar with the cast of characters in last week’s 9-11 demonstration in Brussels, the guy flying the plane in the above cartoon is the socialist mayor of Brussels, Freddy Thielemans. The two men standing in for the Twin Towers are Vlaams Belang leaders Frank Vanhecke and Filip Dewinter, who were beaten and arrested during last Tuesday’s demonstration in Schuman Square.

Our Flemish-American correspondent ProFlandria sent us his translation of a post that appeared on the Vlaams Belang website, concerning the events of September 11th in Brussels. The commentary and explanatory text in square brackets were added by ProFlandria:

“I have never been so ashamed to be a Police Commissioner [Chief of Police]. I find it very sad that I have to see this three months short of my retirement. The problem is the way my colleagues treated several members of Vlaams Belang. There is no greater shame. While they were talking to the press, they were forcefully carried off, kicked, and thrown on the ground without having given the least cause. There was no violence or destruction [by the demonstrators, of course].” Thus writes [Mortsel] Police Commissioner Alex Herreman in an angry letter posted on the Internet [I’m still looking for it] and subsequently borrowed by Pallieterke [a pro-Flemish magazine].

This scathing analysis directly contradicts several progressive [i.e., leftist] activists who take pleasure in the brutal smackdown of a peaceful protest action, or who maintain that VB deserved what it got.

“When you compare this with a situation several months ago where the Antwerp police passively observed a banned immigrant demonstration that resulted in hundreds of destroyed cars and tens of smashed shop windows, it makes you sick to your stomach”, the Chief continues. “Moreover, as an insider, I know that the reinforcement that the Brussels Police requested from the Federal Police was assigned to a Liege police cohort. Knowing that especially VB-people would be present, this constitutes a most egregious provocation. This is borne out by the insults that these policemen used, such as “Sale Flamand” [dirty Fleming] which had nothing to do with the demonstration itself.”

Former Chief of Police Hubert Buysse has nothing good to say about the actions of the police gang: “When I see the picture in today’s Gazet van Antwerpen [Antwerp’s daily newspaper] showing Frank Vanhecke being manhandled by five ‘brave’ officers, I have to conclude that certain things proceeded in an unethical fashion.” [can you say “understatement”?]

As cited in Pallieterke, Buysse says he was no choirboy in his day. “But when you see how a, frankly speaking, cowardly officer squeezes Vanhecke’s genitals while he is being held by four other ‘heroes’, that appears to me to be far beyond the permissible. Replace Vanhecke with a Muslim, an environmental activist, or a leftist political activist, and the roof would come down. VB people really appear to be declared outlaws — and that is not democracy.”

Pallieterke is a subscription magazine, and I have not been able to find Herremans’ original internet article yet. However, he is on a list of people who support Flemish independence, so he is not a neutral observer. Hubert Buysse was a VB candidate for Town Councilman in Brasschaat (suburb of Antwerp). Still, you can’t really discount their observations…