O followers of the Book! do not exceed the limits in your religion, and do not speak (lies) against Allah, but (speak) the truth; the Messiah, Jesus son of Mary is only a messenger of Allah and His Word which He communicated to Mary and a spirit from Him; believe therefore in Allah and His messengers, and say not, “Trinity”. Desist, it is better for you; Allah is only one Allah; far be It from His glory that He should have a son, whatever is in the heavens and whatever is in the earth is His, and Allah is sufficient for a Protector. 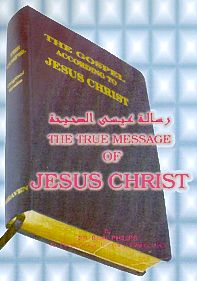 That’s what the Koran has to say about Jesus Christ: he is not the son of God, but only a messenger of Allah, and he does not partake of any aspect of the divine, nor should the Trinity be mentioned. In other verses it asserts that Jesus was not crucified, and neither died nor was resurrected.

Yet to the aspiring Christian dhimmis of the West, the very fact that Jesus (Isa) is mentioned in the Koran, and is revered as a prophet, is enough to prove that “Islam and Christianity are compatible with each other”.

His Grace Thomas Cranmer, the Archbishop of Canterbury, brought to our attention the latest chapter in this sorry saga, in the form of a television program which will air shortly on the British ITV network.

There’s an article in yesterday’s Grauniad about the program:

There was no manger, Christ is not the Messiah, and the crucifixion never happened. A forthcoming ITV documentary will portray Jesus as Muslims see him.

With the Koran as a main source and drawing on interviews with scholars and historians, the Muslim Jesus explores how Islam honours Christ as a prophet but not as the son of God. According to the Koran the crucifixion was a divine illusion. Instead of dying on the cross, Jesus was rescued by angels and raised to heaven.

The one-hour special, commissioned and narrated by Melvyn Bragg, is thought to be the first time the subject has been dealt with on British television. Lord Bragg said: “I was fascinated by the idea … Jesus was such a prominent figure in Islam but most people don’t know that.”

He denies the programme will divide communities. Raised as an Anglican, he describes the documentary as thoughtful and well researched. “I hope it will provoke among Muslims the feeling they are included in television.”

Aha! Keyword: “included”. Inclusiveness trumps everything else. The greatest good within Western society is that a Muslim feel “included”.

Oh, and also “not offended”. Don’t forget that one. It’s very important.

Philip Lewis, the Bishop of Bradford’s aide on inter-faith matters, urged believers on both sides to take advantage of a “worthwhile contribution to understanding a complex issue”.

But not all of them. Patrick Sookhdeo begs to differ. He’s a convert from Islam; maybe that explains his oppositional stance:

However, Patrick Sookhdeo, an Anglican canon and spokesman for the Barnabas Fund, which works with persecuted Christians, accused broadcasters of double standards. Mr Sookhdeo, who was born a Muslim and converted to Christianity in 1969, said: “How would the Muslim community respond if ITV made a programme challenging Muhammad as the last prophet?”

Well, we know exactly how they would respond. And ITV knows, too, which is why they would never broadcast such a thing. Nor would the BBC, nor DR, nor the CBC, nor ABC, nor…

When’s the last time you saw a mob of enraged Christians burn down a TV station or behead an offending filmmaker? Despite the fact that movies, TV, radio, newspapers, and magazines display material every day that is offensive to Christians.

The director and producer, Irshad Ashraf, said the film was an attempt to shift the focus away from extremism to the spiritual side of Islam. “Jesus is loved and respected by Muslims and he’s one of the most important prophets in our religion.” Representatives from mainstream Anglican and Catholic organisations were invited to take part in the film, to be broadcast on Sunday, but nobody was available, Mr Ashraf said.

Here’s what Cranmer has to say about that one:

Nobody available? From the spiritual and theological centres of Westminster and Canterbury, from the bishoprics to the academic faculties of the Church of England and the Roman Catholic Church nobody was available? What are these people doing with their time? Are they all at home washing their hair, eating dinner in front of the television, or writing yet another article condemning gay bishops? Have they any sense of their priorities that, given a chance to witness to the gospel on national television, to be apologists for the truth of the crucifixion and resurrection, they are ‘not available’?

I have a feeling that prominent mainstream Christians are going to be “unavailable” until the crisis has passed. At which point, naturally, they will be available publicly to proclaim that la illaha ila Allah, wa Muhammadun rasul Allah.

I used to wonder how the gays, the feminists, and the liberal mainstream Christians were going to accommodate themselves to the coming Caliphate. Eventually, given the persistence of their alliance with Islam, they will have to reconcile their views with those of the Ummah.

I still don’t know how the first two will do it — the feminists will have to engage in first-degree cognitive dissonance to manage it, and the gays will have to go straight or surrender their lives.

But the shape of the mainstream Christian capitulation is now becoming apparent.

The Muslims respect Jesus Christ, therefore Christianity and Islam can get along just fine. We’ll concede a few points of doctrine, but, hey — what’s a little difference of doctrine between friends?

Veils — that’s just a way of respecting women, right? Didn’t nuns used to be veiled, too?

And toppling stone walls on gays? Well… let me consult with the House of Bishops; I’ll get back to you on that one.

I’m talking about the Protestants, of course. The Roman Catholics can be expected to hold out a bit longer. And the Orthodox church longer still.

But Christians better get a grip. Or are they going to leave all the dirty work to the atheists?

20 thoughts on “The Islamification of Christ”